How fast time goes by! It feels like yesterday that the spring rains made for a lush garden and an exciting garden tour. By now, the garden has settled into its summer pattern. Some plants, such as the Polypody fern and the Western Bleeding Heart, have gone dormant already or are on their way out. Others are only now starting to shine, like the Jones' Mallow above, which is blooming abundantly for the first time this year.


In the grand scheme of things, the pretty pale pink flowers are small and insignificant, and this mallow shines especially because of its attractive grey foilage. Above, you can see it with the first blooms of Ruby Red buckwheat, and the last blossoms of a large Ocean Spray (holodiscus) bush.

Everything's starting to look -- summery. The grasses are partly brown, partly green. Many plants are getting serious about producing seeds.


And the big impression of the garden is no longer pretty and colorful - instead, we see how interesting the combination of green, grey (California fuchsia) and green can be. The green above comes from coffeeberry in the background, a manzanita mid distance, and a Butterfly Weed (Asclepias speciosa) standing upright in the middle of the picture. Here's a close-up.

This butterfly weed goes completely dormant fairly early and doesn't come out until fairly late, but when it's blooming, it's worth the wait! Spreads by rhizomes if you water your garden, but is well behaved if you don't.

Another winner this season, and new in the garden, are several 'Jelly Bean Gold' monkey flowers. I've planted these in part shade (morning sun only). They had a late start, but now I'm very happy with the beautiful big flowers - and they seem too last even as it's getting dry. 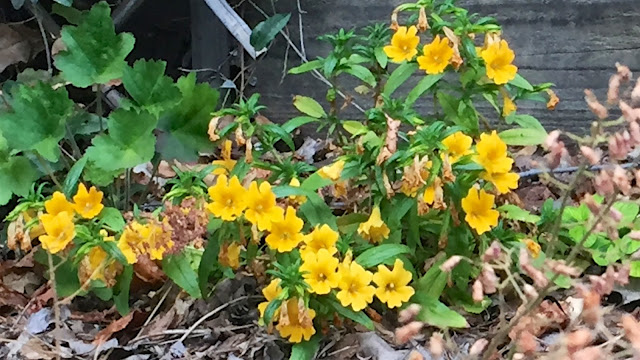 I decided to try `Jelly Bean Gold` after I'd been impressed with the performance of another Jelly Bean cultivar, shown here with some Stream Orchid and ferns.

The best and biggest addition to the garden, however, is the new bridge that Mr. Mouse built for me over the weekend. The wood of the old bridge had rotted after probably 20+ years, and we jointly found a replacement online. Mr Mouse worked hard to put all the pieces together.

Here you can see the bridge tantalizingly in the background, with the seated Buddha in the foreground, and the last blossoms of Triteleia in front.

And now we're moving closer. We both like the curved railing - it will be a great place for the juncos to rest on their way to the next. We seem to get at least one pair building a nest in the agapanthus or under a fern, and they like to stop briefly and check that nobody's watching (luckily they can't see us inside the house). 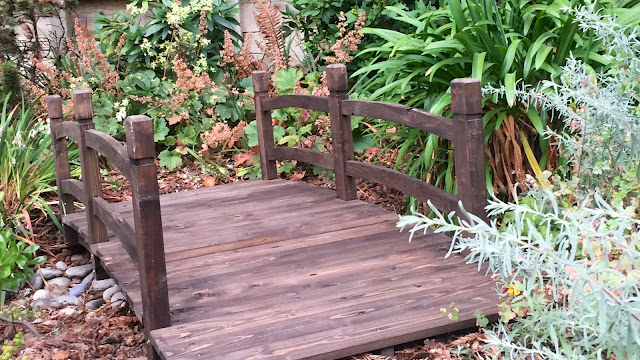 And with that, the birds and I say "Thank You Mr. Mouse" and we wish all of you Happy Summer Solistice!

The eyes are one thing that is different. The alligator lizard, has those dramatic golden irises, whereas our friend the Coast Fence Lizard has warm brown eyes. For a lizard.
The eyes of the Southern Alligator Lizard are yellow or light. Its Northern kin, who I think are also found around the Bay Area, have darker eyes. My baby really had bri…