Posted by Country Mouse on October 16, 2017
My younger daughter's family are known here as The Squirrels. The young squirrels joined me to day, to create a container in whicha tiny paintbrush (Castilleja affinis) seedling might flourish.


It's been a disappointing year for paintbrush propagation. Few blooms either in the garden or in wild sites nearby. But zero seeds.

What did bloom, however, was very lovely...


And I did have a few seeds saved - never sow your last seed! - and so far only that one precious little plant has come up.

BTW - I saw the coast paintbrush (Castileja affinis ssp. affinis) flourishing in the wild. I took this picture of one just the other day, at Franklin Point, in San Mateo County.

I started to pick out plants and a pot, and then the young Squirrels wanted to join in, and they were a great help indeed. Here, I'll call them Hazelnut (6) and Acorn (3).

The first task was to mix some perlite into the store-bought organic potting mix to make a lighter planting medium that is well-draining, and fill up the pot.

Hazelnut was excited to learn (or recall) that paintbrush needs other plants in order to grow - that it can't grow all on its own, or not very well (it does have its own roots, but relies on sinking its haustorium into other plant roots also).

She told me that plants need roots to get water and food, and that roots need air, and that's what the perlite is for. Clever girl.

She also told me that some dinosaurs had feathers and that's where birds come from. Hazelnut is very interested in many aspects of nature and has a lot of theories about things. Her theory about birds is that maybe the dinosaurs dropped their feathers and birds picked them up and that's how birds got their feathers from dinosaurs. We had a little discussion about that. 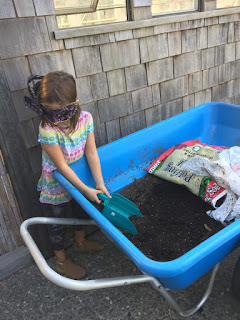 I decided to add three different kinds of sedges (Carex spp.) to the container. Their identities are a mystery as yet so this gives me a chance to watch these three as they grow out.


We'll see! I'm going to work at getting IDs for sure this year!

We put the tall sedge and needlegrass at the back of the container. In the middle went the tiny paintbrush seedling and near it the Coyote mint. The small round sedges went near the front of the container.

Hazelnut was a pro at loosening up roots that had become compacted in their small pots, so the roots would be able to grow out into the bigger pot. Here's a little video....


And in case the video doesn't work for you - here's a photo from it...


And Hazelnut learned that you must dig a deep hole for the roots and make sure the place where the leaves meet the roots (the root crown) is just at the surface. 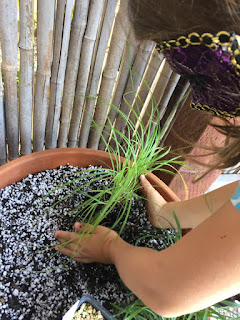 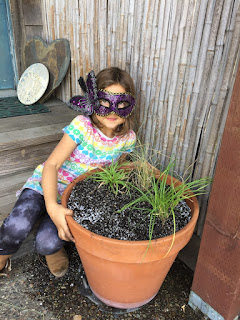 We won't know which plant the paintbrush chooses to sink its parasitic haustorium root into, but at least we've given it plenty of choices.