Tassajara 2016 - A Banner Year for Wildflowers

Posted by Town Mouse on May 28, 2016
This May, I had the good fortune to attend the Wildflowers and Birds of Tassajara workshop - one of the longest running workshop at Tassajara Hot Springs monastery. I had hoped that the spring rains would bring an abundance of wildflowers, and was not disappointed.

After the workshop, I stayed a while longer. These photos are from three different hikes - two to the top of the ridge on the road, and one on the horsepasture trail.

When my friends and I drove in, we already remarked that this was a year with unusual abundance of blooms. Above, ceanothus integerrimus in full bloom. At the top of the ridge, it was mixed with wart-leaf ceanothus (ceanothus papillosus). Our teacher Diane told us that she's heard this beautiful plant is often used for hybridizing by nurseries.

Penstemon centranthifolius 'Scarlet Bugler' was everywhere, in full bloom. I saw it in in the Tassajara garden, along the horse pasture trail, and even at fairly high elevation. And yes, hummingbirds love it. I'm going to plant another one (or two) in my garden this fall.

Also along the road on top of the ridge was chia, beloved by the Native Americans and now a popular health food. Beautiful color, as well.... 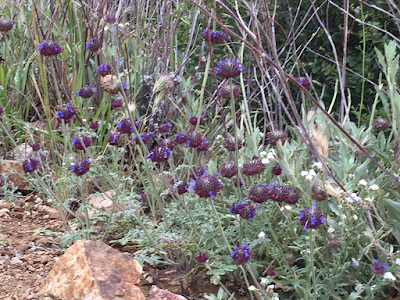 Further down, the hills were covered with the flowers of perennials. The photo below shows monkey flower and golden yarrow, with yerba santa in the background. The monkey flower in this region was considered a separate species because the flowers are larger and a lighter yellow then the typical monkey flower - but the botanists changed their mind. Golden yarrow is not a yarrow, its botanical name (right now) is Eriophyllum confertiflorum. Because this attractive short-lived perennial gets by with very little water, I just planted two in my garden. We'll see whether it can tolerate the clay.

Because I stayed at Tassajara for two weeks - some of that time working as a student - I was able to see the changes in the flowers. The coyote mint, shown below with golden yarrow, only started blooming as I was about to leave. Some plants, such as globe lily, were almost done blooming when I arrived.

I kept thinking how mother nature's plantings easily outshine many plantings I've seen in gardens, and felt so fortunate to drink in the beauty (and to learn about the plants and ecology from such a knowledgable teacher).
Some of the plants, such as the larkspur below, I'd always thought of as garden plants. But in the Los Padres national forest, they bloom along the side of the road.

The abundance of annuals was also stunning. We saw fields of clarkia, interspersed with other annuals.

The tarweed (madia), a summer bloomer, was a suprise to me, but I saw it other places as well, including the Tassajara grounds and along the road with yucca.

But I found other signs of the fading of spring - the clematis showed its seedheads already. The baby birds were fledging. All showing a change of seasons.

Wouldn't it have been fun to stay longer, to experience the seasons change, to see other plants and birds? But my own garden was waiting, and I was happy enough to return refreshed and with far too many photos... I'm leaving you with my favorite harlequin lupine, which I saw along the side of the road. Amazing!

Country Mouse said…
Wow!! So fantastic! I did a double-take on the coyote mint and golden yarrow photo - because I've got the same two plants growing near each other in my garden and just this morning I was taking a picture of them! I know it is impossible to convey the beauty of Tassajara in photos but my imagination can take me some of the way there! Thanks for the wonderfulness!
May 28, 2016 at 2:01 PM