Posted by Country Mouse on March 27, 2016
As readers of this blog may know, Town Mouse and I make an annual trip to the San Francisco Flower and Garden Show, to volunteer in the California Native Plant Society booth for a few hours, and then to enjoy a wander around. Unfortunately she couldn't make it this year, but a friend of mine from our local Santa Cruz County chapter of CNPS agreed to come along and we teamed up for a volunteer shift. 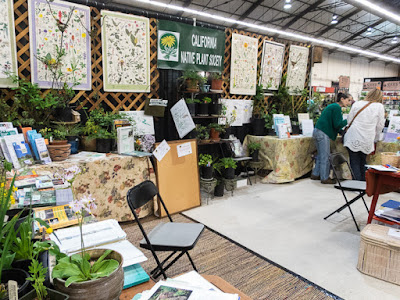 This year's booth was amazing - Due to amazing low prices, Yerba Buena chapter's own Ellen Edelson (shown on the left above) was able to book a double-wide space -- and due to Ellen's amazing powers - the booth was full of interesting things to look at and engage with. 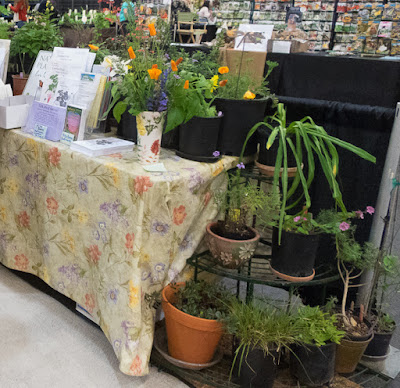 Our next door neighbors were Foothill College Hort department, where I took a number of courses while I was still commuting past the campus on my drive home from work. 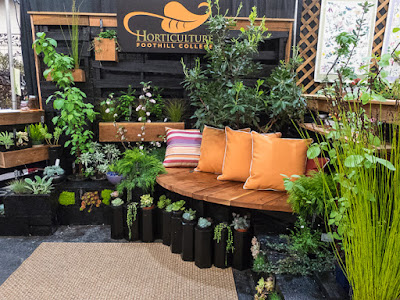 It was nice to visit an old prof. of mine there and chat with current students. Their booth was very attractive and compact.

But overall, I have to say, the show was disappointing this year. I feel sorry for the organizers - something must be very amiss in their world. And that's probably why they were offering double-wide booths at bargain rates. There were few gardens. I've tried to google this year's gardens, but have not been able to (I saw a message on Google saying their site was hacked) but - really it was quite lacking in that verve and fun and interest that we mice have enjoyed in visits past (here's links to 2015, 2014, 2013, 2012... - or use label "Garden show" to see them all).

The standout for me was Nature at Your Door, which was a 100% natives booth. 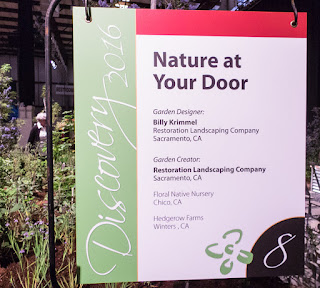 I read that Billy Krimmel, founder of Restoration Landscaping Company, has been working to create "bugscapes" in vacant city lots, which is an interesting idea. He says:


We want to plant both the plants and the insects (i.e., breeding and releasing native insect species on the native plants we plant), and pick combinations that are of value for education, restoration and pest control.


What we bring to the table is a completely new concept of gardening that focuses on plant-insect ecological communities rather than just plants.

And the garden for the show, which took a couple of gold medals, was designed to be "an ideal habitat for dragonflies and butterflies."

Ah, dragonflies -- hence the water feature - which wasn't a wow for visual effect, but now I understand what it's about I appreciate it more. Which is true, after all, of our way of gardening with natives in general. There's more to it than pizzazz. 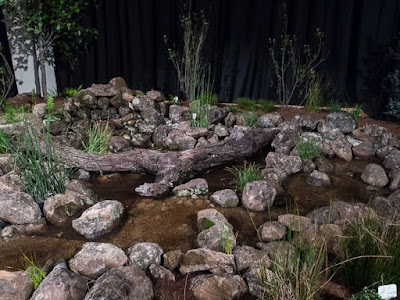 Very interesting. Billy Krimmel holds a PhD in Ecology at U.C. Davis, focusing his research on plant-insect interactions, so I bet his work is really great. Also, I don't think I've ever seen a copy of the Jepson manual lying casually around on a display before: 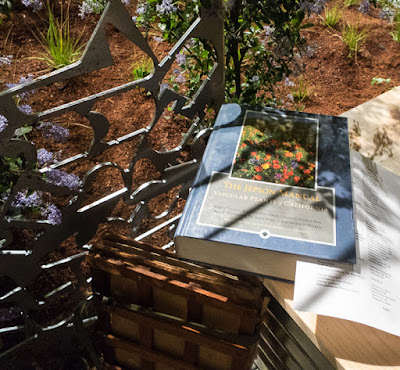 It's too bad we only had an hour or so to look around - we kept to the gardens and truly that didn't take very long. Here are a few more photos of the Nature at Your Door garden. It was dimly lit so - I did the best I could... 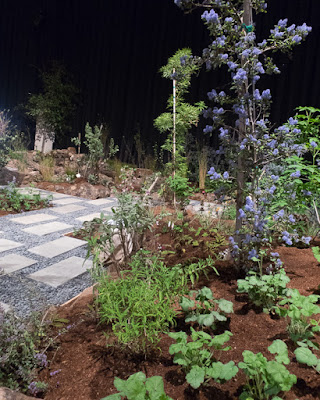 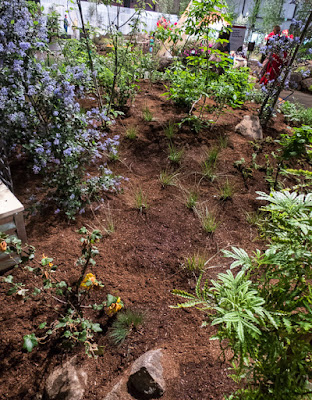 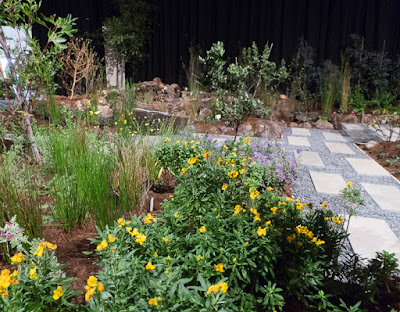 The company also has services relating to rainwater harvesting. I loved this elegant and fun rainwater barrel - I wonder how much it costs? I can't find anything about it on the web. 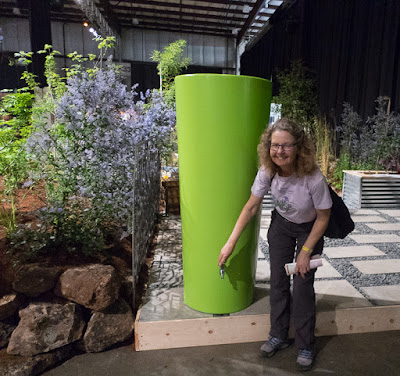 Worth a mention is a company with native (and other) lawn-substitute grasses and sedges. 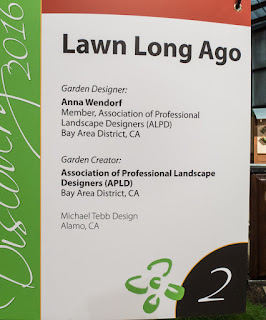 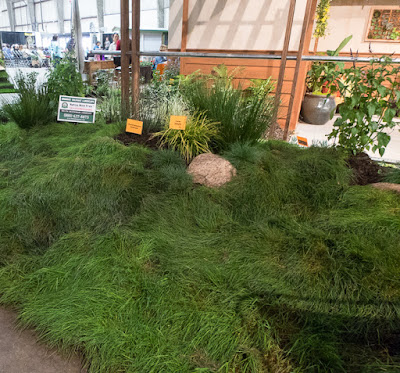 But the only other standout was a succulent and cactus garden, not California natives, whose design and layout was a wow! 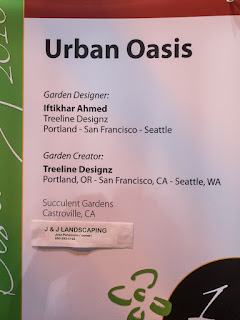 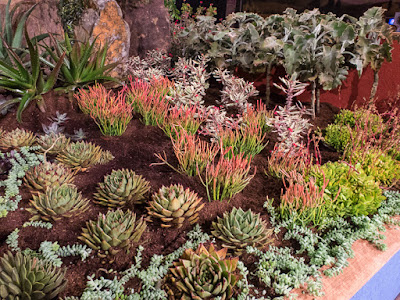 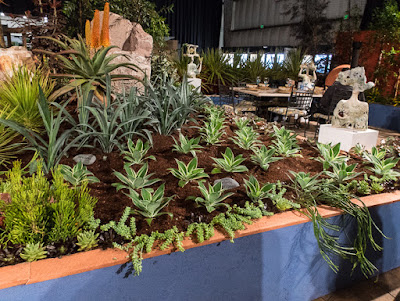 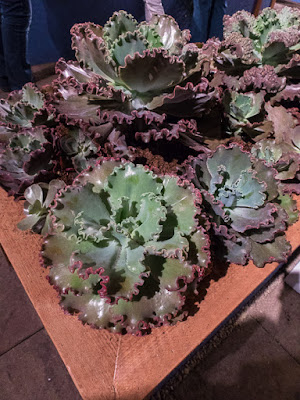 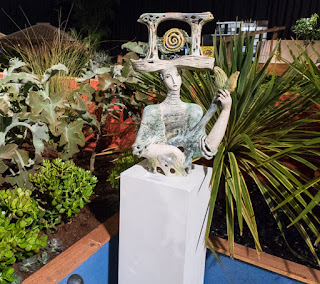 But we did have three people take out memberships to CNPS and we helped a number of others with their native gardening questions - and that was as much fun as ever!
Garden show

Diana Studer said…
I was disappointed that Kirstenbosch has cancelled their annual plant sale this year - due to drought. It will only be every second year. Sad reality. I must make the best of the Rare Plants Fair (which was also cancelled last year)
March 30, 2016 at 3:24 PM

Country Mouse said…
You know - duh! - I didn't think about the ahem- dampening - effect that drought might have on the show! Gardeners have been pulling in their horns. Well here we've had great rains this winter and maybe next year the show will resprout mightily!
March 30, 2016 at 4:11 PM

Hoover Boo said…
The garden-show business is pretty tough, apparently. Our very modest local one gets smaller and smaller, and is becoming more about outdoor furniture and cooking than about gardening. Sigh.

Your photos are excellent--those shows are so difficult to photograph. Great post, thanks!
March 30, 2016 at 6:37 PM

Unknown said…
Reading this post reminds me of my garden. Unfortunately, I lost all my footage of it. Thanks for sharing! This is worth sharing though.
April 1, 2016 at 8:50 AM

Country Mouse said…
Thanks for visiting this post - I hope the plant show picks up again next year since this looks like being a good year for gardeners with the decent winter rains.
April 1, 2016 at 9:04 AM

ryan said…
It wasn't good, very underwhelming like you said. With respect to the gardens, I took a few photos but decided they weren't even interesting enough to post. Kind of a shame. It's the incredibly shrinking garden show. With respect to San Mateo, the show needs to move back up to San Francisco.
April 1, 2016 at 9:39 PM

Country Mouse said…
Actually, Ryan, I like it NOT being in SF because it's easier to get there and park. But it's true the location doesn't exactly have any cachet!
April 1, 2016 at 9:58 PM