He may not like me to put the focus on him, but this post is really all about Gerow Reece, the chap on the right in the photo below.


Zen practitioner, calligraphy teacher, tea ceremony teacher -- and now garden designer -- Gerow has cared for and shaped the the garden at Jikoji Zen Center for many years.


I came to know Gerow as a friend of my son-in-law - AKA Mr. Squirrel on this blog! That's how I came to find out about his plans to transform the garden, using California native plants.

And how I came to have an amazing day at Jikoji yesterday, working in the garden with Gerow and a group of volunteers from an organization called Franchise for Humanity. They were on a weekend retreat at Jikoji.

Right after breakfast, I gave the volunteers a short introduction about how to plant the native plants (and why!) and then we spent the rest of the day planting.

Gerow had placed each of the plants where they were to be planted, along with a temporary name label nailed into the soil nearby. 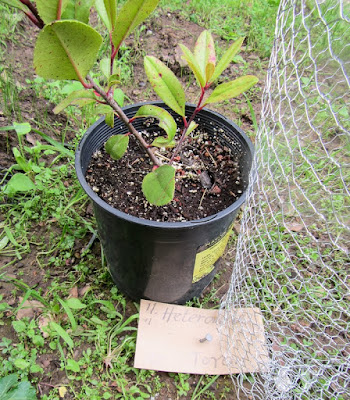 Here's a happy volunteer - I enjoyed eating lunch and working with her and other hard-working volunteers... 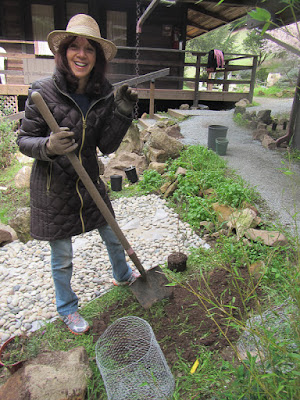 ... Like this fellow. We planted a lot of Juncus together. 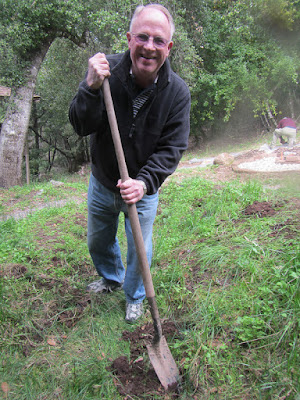 Here is a "before" shot of a shady (except early afternoon) and sloping triangular garden area You can see stonework Gerow has done in years past: 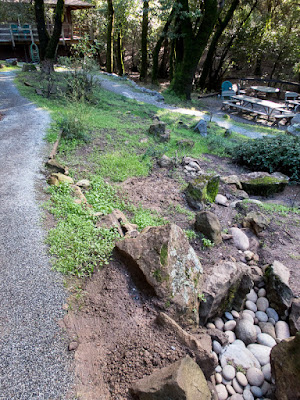 And here is sort of an "after" shot. Not quite from the same viewpoint. What a difference many barrow loads of stones makes! Plus Gerow's wonderful sense of design. 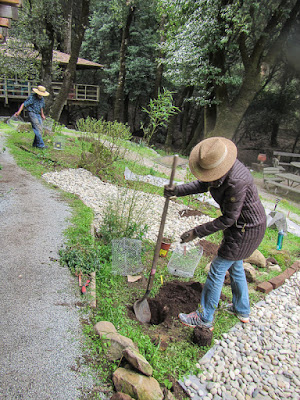 Deanna Giuliano (see below) made a gift of this King's Mountain manzanita, Arctostaphylos regismontana, a rare plant endemic to the northern slopes of the Santa Cruz Mountains, where Jikoji is located. Talk about adding a sense of place!


Another view of this area, before - see the mounding Ceanothus in the center? 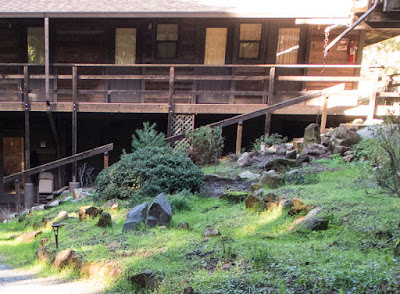 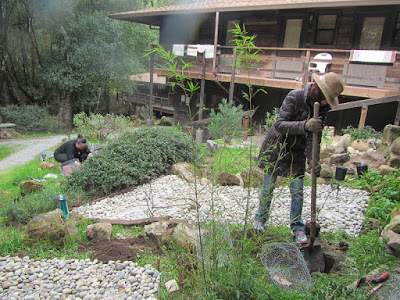 It was amazing to see spaces transform through placement of pale stones, large and small. (The bamboo in the foreground was removed and put elsewhere in a large container.)

Here is Gerow's sketch plan for the above area, from which he worked his transformational magic. It amazed me that he took on board so much information about native plants in basically three learning sessions. 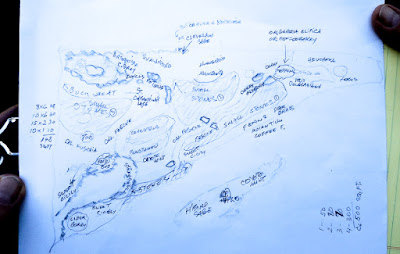 On the other side of the Zendo building is an open grassy area. While it wasn't the focus of yesterday's activities, some wonderful hardscape was created there... 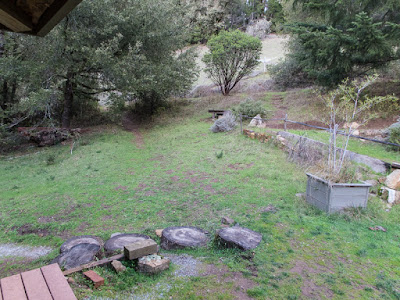 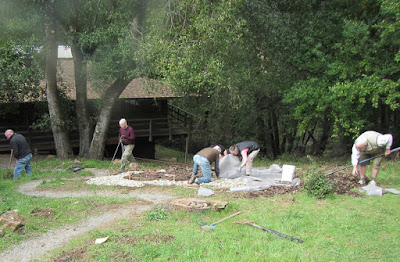 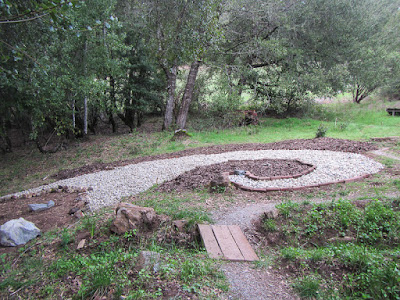 Gerow explained (as far as I can recall) that the comet shape gives a sense of containment and limitation and the dark areas surrounding it show limitlessness. There is a larger stone (hard to see) in each of those two areas, one at the end of the pale curl and one in the dark area it almost encircles, reminiscent of the yin and yang symbol.

For me, it all began a few weeks ago when Gerow and I spent a morning in my garden talking about native plants, then an afternoon at Jikoji, walking around and talking about what plants might be good for a mixed woodland site with some open spaces and quite a bit of shade.

Of course we consulted the book California Native Plants for the Garden - as everyone should who is planning a garden that includes California native plants.

I thought it would be a good idea to ask Deanna Giuliano, our Santa Cruz CNPS chapter president, if she could offer some advice. She is a professional botanist familiar with the plant communities at Jikoji's location (map). She agreed!

After enjoying ceremonial tea served by Gerow, we wandered the garden and nearby areas, looking at what is growing wild on the site - hedge nettle, creeping snowberry, milk maids, strawberries, trilliium - and of course - much more. As we talked together about the garden areas, I felt encouraged that Deanna and I came to many of the same ideas - yes, I am living and learning!

The garden is by no means finished of course - there is a lot of dedicated weeding in its future, and filling in with more plants. I'll definitely be visiting Jikoji again to see how the garden develops - and I'll happily share its progress. I know this garden is in good hands!
other gardens Projects

Diana Studer said…
It will be interesting to look at that garden in a few months, after winter rain, in a year - and see how it develops its potential.
March 1, 2016 at 1:05 PM

Country Mouse said…
Yes, indeed, Diana - I hope we'll have an online conversation about this garden by and by, as it develops.

BTW I wanted to mention that the Berkeley Sedge is the true native, Carex tumulicola, and not C. divulsa, a non-native, which has been sold quite extensively under the name "Berkeley Sedge" -- causing much hair tearing among those of us who care about these things.
March 1, 2016 at 1:26 PM

I hope this email finds you well. My name is Annie and I am writing to you from the editorial team at Houzz. I recently discovered your site and your writings and was overwhelmed by how many amazing plant and garden resources on native and ecological gardening you've uploaded to your site. Here at Houzz we've been expanding our gardening content, especially our native gardening content, to a more regional scale, and I'm looking for a top professional in California.

Would you have any interest in writing for Houzz? I think you could be a great candidate for this. I'm happy to give you a call and tell you more about what this would entail. Let me know what you think.

P.S. If you have a moment, feel free to explore our what native plant content we already have: http://www.houzz.com/ideabooks/native-plants
March 8, 2016 at 2:58 PM