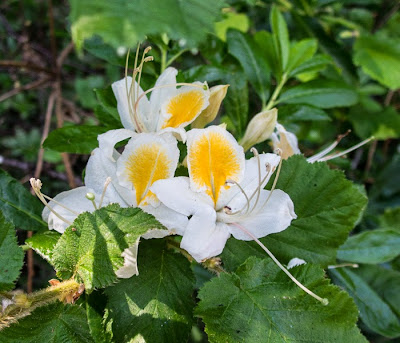 Note: this post is edited as I had misidentified red twig dogwood as ninebark - I won't do that again! My thanks to an astute commenter (see below.)

So as I drive the creek-side road up towards our ridge-top road, I keep my eye open for seeding natives that might like to extend their reach by a mile or two to my restoration garden. I stopped to check and -  POW!! I saw the white and yellow blossoms of Western Azalea (Rhododendron occidentale).

I've been keeping my eye on the Phacelia californica (I think that's the phacelia species) that grows along the road side.

The stems and leaves are prickly-irritating so I don't want to put them where I'll be doing a lot of hand-weeding. I'd just like them to live wild and prosper in the wilder parts of the property.

I took four flower heads that had mostly gone to seed - though the fruiting bodies are a bit green still. I'm hoping some seeds will mature and dry in a paper bag. There are enough blooming plants that I think it's worth just a try. I'll wait before checking them again and try to learn their seed ripening time for future reference. 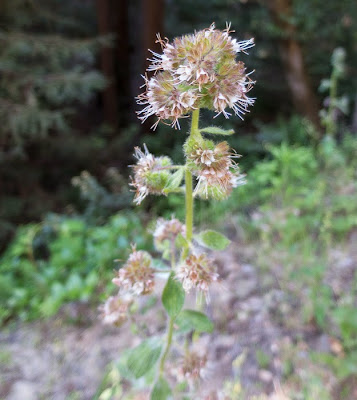 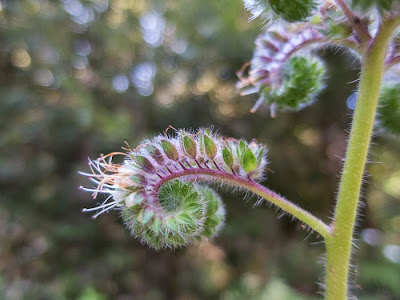 Because the inflorescence is a scorpioid raceme (yes I did have to look that up), new flowers bloom towards the unfurling end while flowers lower on the rachis (another term I had to look up) get on with turning into seeds.

And BTW this is the area where there is a nice reg twig dogwood (Cornus sericea) shrub, another shade lover.  So far I've failed to make plants from cuttings - I have one still hanging on but I'm not hopeful. So I'm moving on to trying from seed.

So - the western azalea story.


Usually I've seen the western azalea in this creek only in inaccessible locations, deep in a poison-oak filled area. Here it was proffering nice soft- to semi-hard shoots, hanging out where the road maintenance hedge-trimmer tractor attachment would be sure to macerate them e'er long.  They begged to be turned into cuttings and - hopefully - increase the western azalea population in our area.

So I took out my little folding scissors and neatly snipped off four low-growing shoots, about six or eight inches each, leaving narry a stub.

Back in the greenhouse, I made eight or nine cuttings and put them in my plastic greenhouse with other cuttings.


I've set the mini-greenhouse up in a peculiar part of our bathroom where I hope cuttings will not get too hot or dry out too fast. The deck outside is shaded. (It's an owner-built house and has some oddities in the original construction that Wood Rat is putting to rights bit by bit!)


I have to confess I've not had terrific luck with cuttings lately, except for anything in the Ribes genus. If you fancy a go at growing from cuttings I can recommend Ribes as a slam dunk no matter how you do it!


So - wish me luck. If they do grow, and I get more than the one or two plants I think I can support with a bit of irrigation in the shadiest part of our property - I'll offer them to neighbors who have creeks on their properties. That would be fabulous. But - I'm not going to be too disappointed if it doesn't work. Just coming upon those lovely blooms was enough pleasure for me.

And oh here is another lovely bloom that was growing in that nice part of the road (which is otherwise slowly succumbing to invasive weeds, I'm very sorry to say).


Footnote: I always gather responsibly (very small percentage of seeds, minimal gathering of material for cuttings), and only very locally to my property - never in public parks or protected areas. I gather with permission on my neighbors' properties, and along verges of nearby county roads. I was told by a commenter a while back that gathering from roadsides is illegal (tell that to the berry pickers!!). I actually tried to get a ruling from local authorities on the legality of such gathering and they were not aware of any rules preventing me from doing so. Road maintenance crews routinely scalp these county roadsides so I feel absolutely no guilt about doing what I do!

Deborah Jamison said…
Your photos of Western Ninebark don't look like mine, or the photo and description in Plants of the San Francisco Bay Region, (Beidleman, Kozloff), where it is called Pacific Ninebark, Physocarpus capitatus: "leaf blades usually less than 10 cm long, usually with 3 lobes." Your photo looks more like a dogwood. Is that possible?
June 10, 2015 at 2:03 PM

Country Mouse said…
Oh dear! We all get mixed up - and I was so mixed up here. Thanks for your comment - I'll edit the post to correct. I believe it's red twig dogwood! Quite a different plant from ninebark. The blossoms are superficially similar and that's all.

A week after I wrote the post (and forgot that I had written about this plant!) I was at a nursery and saw - ninebark - with leaves much more like a golden currant, lobed as you say.

So now I'm put right and I do appreciate your comment. We all get cross-wired sometimes, and we all forget to check what we think we know - and I am certainly guilty of that! And I'll put in the correction and I'll never ever forget the difference again!
June 12, 2015 at 8:24 AM