Fall Color in the California Garden 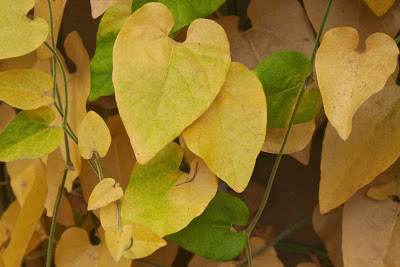 Many California native plants go summer deciduous, or they change the color of their leaves in summer - for example, from grayish green to whitish gray. But a few plants offer a spectacular show in the fall, before dropping their leaves and coming back with bright green in early spring.

Above Aristolochia californica (dutchman's pipe) with its big heart-shaped leaves is always one of my favorites. Even in this dry fall, the leaves did not just crinkle and turn brown but they've turned a showy gold. 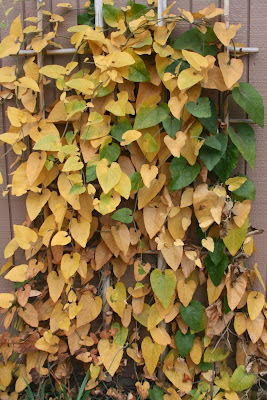 I've also been very happy with an Acer circinatum (vine maple) that I received as a gift. After two little maples I'd tried in a put had died - or maybe they were half dead when I bought them - this one, which I put in the ground under the redwoods, has done well and is delightful with the golden leaves. 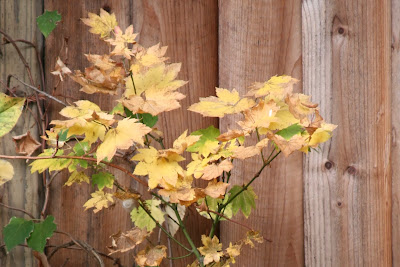 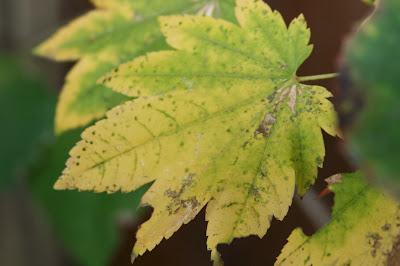 For a little bit of red, I have my Ribes sanguinium, which have a very short dormant period - often, the first green leaves appear in January, and the beautiful flowers soon after. But right now, they fill the garden with color. 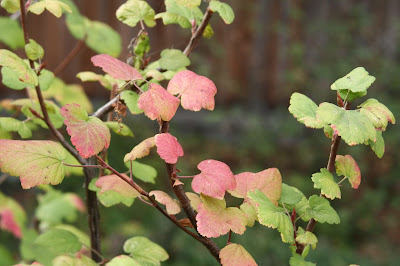 Again, the transition is especially fun to look at. 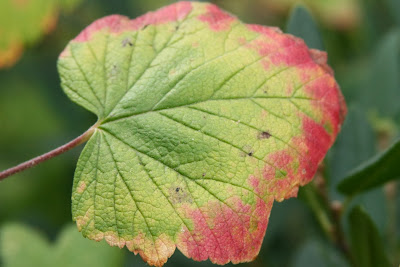 My native rhododendron (Rhododendron occidentale) is not blooming too impressively, but the show of fall color and the big green leaves make this shade lover a welcome guest in my garden. 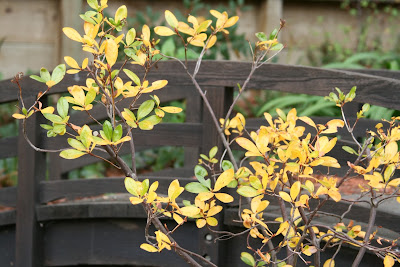 I saw a 30 year old specimen in bloom in the San Francisco Botanical Garden a while ago, and I'm dreaming of a similar show - but for now, I'm happy with a plant that can hold its own in the very dry year that we've had. 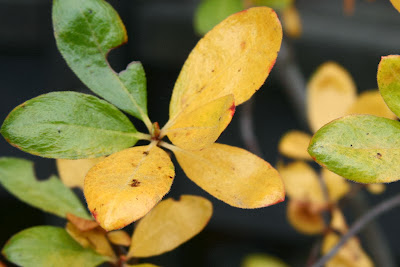 My final photo is not of leaves, but of fall color nonetheless. Here's Heteromeles arbutifolius (toyon) 'Davis Gold', with its golden berries. Every year it's a little better - and after a few disappointments in the garden this year, I'm happy about this encouragement to carry on. 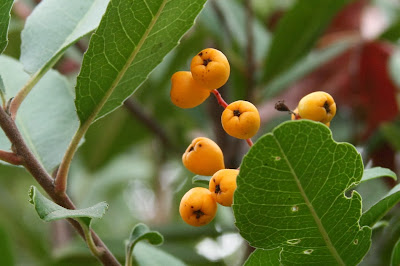 ryan said…
Nice autumn golds, especially the toyon. Interesting that your vine maple turns gold instead of red. Mine had brilliant red fall color this year and last year.
November 20, 2013 at 8:44 PM

Country Mouse said…
I've been enjoying the big-leaf maples along our nearby creekside road this year - wonderful light-filled yellow and golden reaching high in the deep v shaped valley
November 22, 2013 at 8:32 AM

The eyes are one thing that is different. The alligator lizard, has those dramatic golden irises, whereas our friend the Coast Fence Lizard has warm brown eyes. For a lizard.
The eyes of the Southern Alligator Lizard are yellow or light. Its Northern kin, who I think are also found around the Bay Area, have darker eyes. My baby really had bri…