The Forest Unseen. Read This Book. 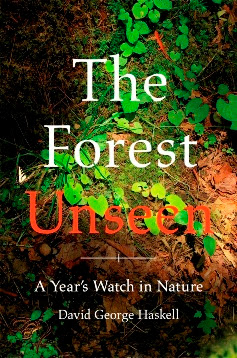 It's been a while now since I read The Forest Unseen by David George Haskell cover to cover, and then immediately started again at the beginning. It's not a long book. As with a very special and rich fruit you eat slowly with a spoon - I relished every word.

Haskell, a professor of biology in Tennessee,  picked out a square meter in an old-growth forest in Tennessee and sat there for around an hour each day, just observing his "mandala" - what occurred in it, under it, over it, and as a result of what happened in it. Each chapter in the book is a short essay or meditation on something he observed during one period of observation.

Here's a taste of this scientist-poet's descriptive powers - but you have to know that the surface descriptions are just the start....

“August 8th — Earthstar. Summer’s heat has coaxed another flush of fungi from the mandala’s core. Orange confetti covers twigs and litter. Striated bracket fungi jut from downed branches. A jellylike orange waxy cap and three types of brown gilled mushroom poke from crevices in the leaf litter. The most arresting member of this death bouquet is the earthstar lodged between rafts of leaves. Its leathery outer coat has peeled back in six segments, each segment folded out like a flower’s petal. At the center of this brown star sits a partly deflated ball with a black orifice at its peak.”

Then he opens up the topic, not to dissect it, but to heighten our perception and deepen our understanding. Occasionally he leaves the ground for a comment, as when a golf ball lands in the mandala.

Do I gush too much? I'm in thrall to this new source of deep entertainment in my life!

I wish I had the book with me but I couldn't resist lending it out already to a neighbor. I'd love to give you quotes about circling vultures being guided by plumes of odor to the next meal, or the way waves of alarm pass from animal to animal and take such a long time to calm down, or the mechanism that makes glowworms glow or... well, you get the idea.

You can hear the author read extracts from the book, while sitting in or near the mandala area here. They are wonderful. There's a lot of other info about the book and its author here too. Haskell blogs marvellously too - here.

I'm so glad to spread the word about this book! I hope you enjoy reading and listening to the extracts, enough to purchase it - and share it with your friends.