Wildflower Hike to the Wind Caves 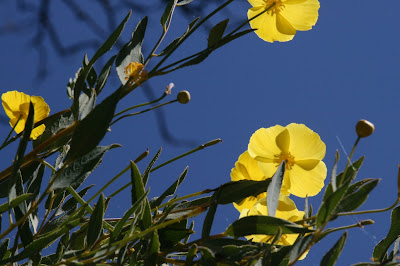 The last three days that I stayed at Tassajara Hot Springs with Mr. Mouse as a guest, we actually managed several wonderful hikes, and my favorite was the hike on the wind caves trail. This hike, in the Los Padres National Forest, had quite possibly the most impressive wildflowers, or at least the most impressive perennials. Above, a Dendromecon rigida (bush poppy) looking glorious against the dark blue sky. Nevin Smith says in his book that every California gardener wants a bush popply and a mantilleja poppy (they're actually both not really poppies) and that both plants get much to big for just about every garden. So, good to enjoy them on a hike. 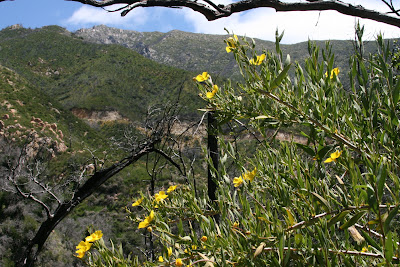 But more was in store. Could it be? The plant everyone is lusting after, right here along the path? 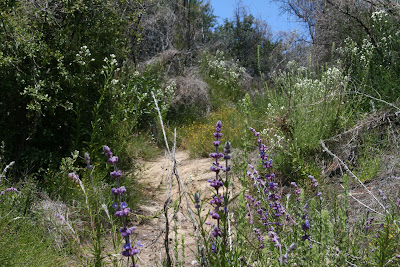 Yes, a Trichostema lanatum (woolly blue curl) in all its glory, right there in its natural habitat. 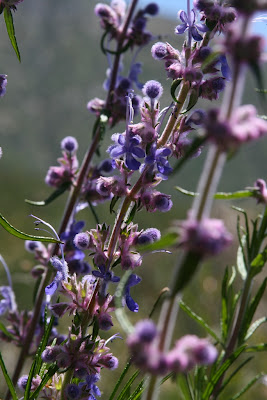 And the surprises continued. I had never seen a pearly everlasting that was blooming so abundantly (not sure of the precise species, it's a large family). 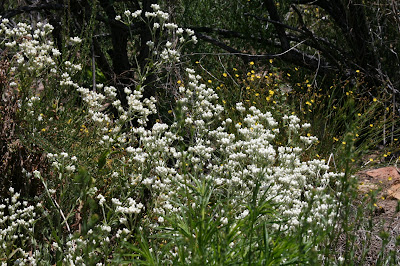 And it wasn't all just plants. We saw a huge iridescent green lizard. 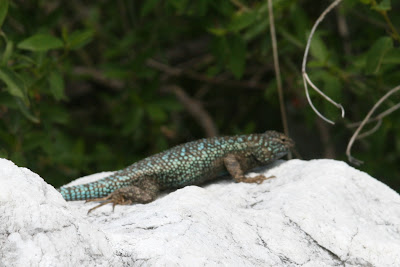 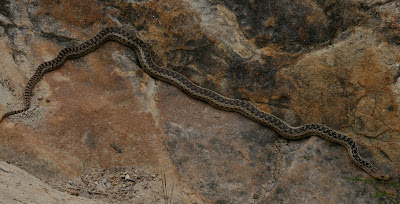 And we saw many butterflies and managed a photo of one of them visiting some Eriophyllum confertiflorum (golden yarrow). Can anyone name the butterfly? 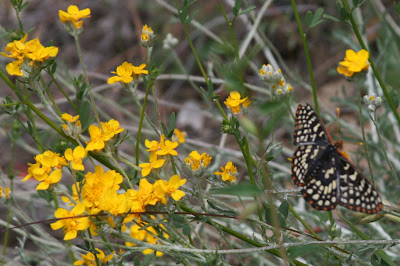 On the way back, we were especially taken with Eriodictyon californicum (Yerba Santa). This plant, which the American Indians prized for its healing properties, is abundant in the area around Tassajara and beautiful in the spring. Sadly, it reliably gets a black fungus later in the year and is not a desirable garden plant. 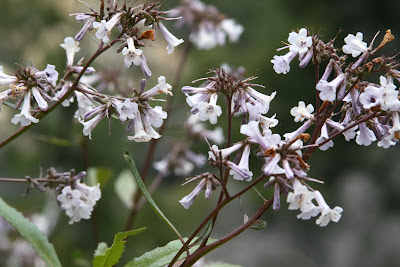 Already on the dirt road back to  Tassajara, and almost able to smell the treats that were waiting for us, we had to stop once again for a photo of Clarkia purpurea (winecup). 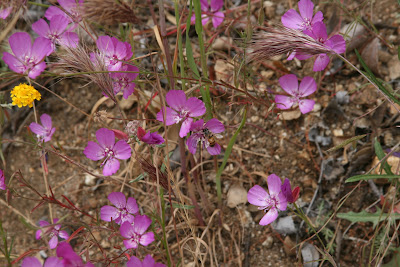 Then we rested from our labors with some tea and a snack, and told everyone else to go see the wildflowers too.
Tassajara

Curbstone Valley Farm said…
I agree, a variable checkerspot (Euphydryas chalcedona), we've had hoards of them here this spring (probably because their larvae relish the Scrophularia growing here). Our pearly everlasting is going gangbusters this spring, not quite as impressive as the one in your photo, but close!
June 12, 2011 at 9:42 AM

Sue Langley said…
Very enjoyable post. Woolly blue curls! Oh, to have that sometime to grow in the garden! Would love that, but will make do with salvias, I guess.

Thanks for the ID of the winecups. I noticed it along our roadsides last year. I hadn't seen it in any other year somehow. Makes you wonder if some plants migate, or if I just don't notice them?

This year they have spread to our land and I KNOW that they have necver been here before. They're tall and lovely and seem to have spread themselves evenly throughout the place.

I've been in process of IDing them. Perfect weather now for hiking and wandering through the wildflowers!
June 12, 2011 at 10:05 PM