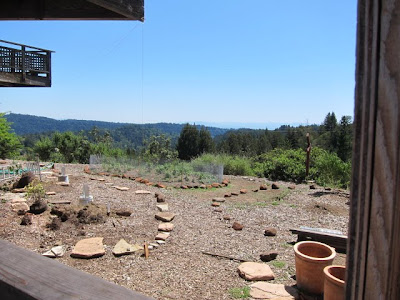 As I was thinking about fall planting in the sunny, flat south garden and the mainly sunny pool garden, I realized I needed some help. I'll be picking Town Mouse's brains for sure, and I also wanted to touch base with my ongoing design coach and friend, Fran Adams, who is retiring soon.

I had outlined some big wide pathways in the south garden and the first thing Fran did in this area was to pull the pathways in, curve them more, and leave much bigger planting areas. (Rat is busy rebuilding the deck above - so it's a bit chaotic there right now. In fact one of the pathways we marked goes diagonally across a pile of lumber!) She softened edges with curves around building corners, and made other interesting curves that I had not thought of. She suggested a row of grasses, maybe deer grass (Muhlenbergia rigens), in front of the greenhouse, with a slightly curving path about three feet out from the greenhouse itself, and at the corner of the greenhouse near the door, a small shrub. I have a coffeeberry that might fit there.

It was great fun moving rocks around and seeing Fran nudging things into shape and point out where we might want a birdbath say and interesting planting, as a focal point.

I was a bit overwhelmed at the size of the planting areas to be filled in, then Fran reminded me that one creeping Salvia sonomensis like "Bees Bliss" for example, would handily fill in a big chunk of space. And she made the prediction that over time, I would have plenty to plant - and besides I can leave a lot of mulch areas at first.

We also sat and contemplated the pool garden for some time. I knew it needed something to pull it together, but what? That's where my mind fails me. Fran suggested a large evergreen shrub or small tree, in the area between the two posts you can see below, which indicate where Rat wants to strengthen the fence against the fierce winter winds.

The bracing would not be up to the top of the fence like that; the posts are just leaning there to show where braces need to go. In fact I had thought of a bench and trellis kind of a thing instead of diagonal bracing, but Fran noted that we have a lot of hardscape already. 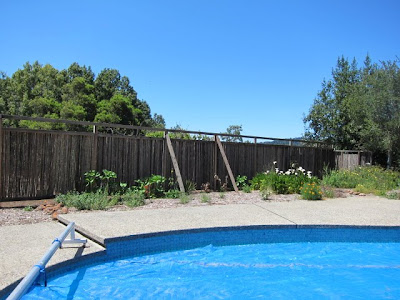 Well yes, of course, now you come to mention it - obviously we need a big and dramatic shrub here. Why couldn't I see that? Oh well, we all have strengths and - like the fence - areas that need strengthening.

We had lots of other discussions and ideas, but I'm focusing right now on choosing a large evergreen shrub say up to 8-12 feet tall and 8 feet wide or so, that can take full sun and can be happy near a pool, and work with a warm color palette. I'd like a native but I'm also not averse to a wildlife-friendly non-native that has good qualities for an ornamental garden, for example, it could provide nectar and pretty blossoms in summer.

We pored over the garden books and here are some initial ideas - I welcome your thoughts too. BTW on some of the list items, I'll have to follow up with Fran who made specific recommendations that I did not note down, even though I thought I did.
For some reason I really like the idea of the citrus, at least at the moment. I like the glossy large leaves, and even though we can pop through to the next door neighbor's garden and take as much citrus as we can eat, I like the idea of having lemons for my tea growing in the pool garden. But - what do you think might look good there?

James said…
I see the pool and my mind jumps straight to something "riparian," although I understand that the pool is contained and not participating in the hydrology of the garden. My local riparian habitat features species like live oak (too big), arroyo willow (too messy), poison oak (too toxic), mugwort (too feral), mulefat (probably too rangy). But the plants have a certain leafy look that could be replicated in more garden-compatible choices that could suggest lushness, even though they might be truly riparian. And that look should play well with the other plants you already have. My two cents...
May 2, 2011 at 9:17 PM

Country Mouse said…
Riparian looking lushness - but on a completely sun drenched (in summer) ridgetop. Yes, James I see you appreciate the dilemma! I think that's why I like the lemon tree idea - large, glossy green leaves. Thanks for the suggestion to look at that plant palette - there could be something there that would work with some irrigation.
May 3, 2011 at 7:13 AM

Sue Langley said…
Hi Mouse,
I know you already have some ceanothus, but I have a Ceanothus 'Ray Hartman' that would just fit within those posts and it reached it's full growth very quickly, too.. That's my vote! hahaha
May 3, 2011 at 11:07 AM

Town Mouse said…
Maybe a spice bush? With enough water, it should be fine (remember the one at Tilden).

Lemons like to get all kinds of nasty diseases and often don't look so large glossy.

I also think a ceanothus would be great - you could pick a white one. Or maybe a manzanita?

Kate/High Altitude Gardening said…
It's always been my dream to live in a place where I could grow a lemon tree. Things may look a little bare right now but you're gonna have blast filling this in with pretty flowers!
May 3, 2011 at 2:36 PM

Brent said…
It looks to be too sunny for Carpenteria, but maybe the fence is lined up to give you enough shade to make that work.
May 4, 2011 at 9:33 AM