Posted by Country Mouse on May 17, 2011
The wonderfulness of the Wildflowers and Birds of Tassajara workshop that Town Mouse and I just enjoyed was quite overwhelming. The people were great - both the leaders and the participants - the place, stunning - I hardly know where to start.

Tassajara is a hot springs resort and Zen training monastery in a remote valley of Big Sur, and in summer they have a guest season. Their vegetarian dining is legendary, the bathing superb, the chance to participate in Zen meditation and practice inspiring.

Our first full day started with birdwatching - that day and next we saw and heard Bullock's Orioles, black-headed grosbeaks, dark eyed juncos, black phoebes, scrub jays, house wrens, canyon wrens, hairy woodpeckers, olive-sided flycatchers, western tanagers, red-tailed hawks - and of course, Stellar's jays. I didn't get a photo of one - and now I regret it - they are so vivid. But I enjoyed watching their cheeky bold ways.

Later the same day we headed up to Prayer Flag Rock, and were all entranced by the colors and varieties of wild flowers and other native plants. 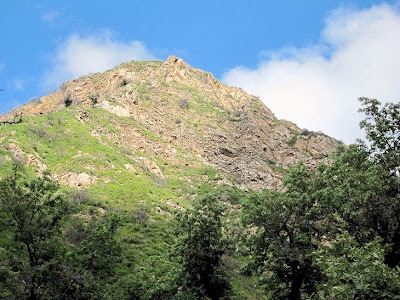 Here we all are on the trail that winds up there. It was such fun to be in the midst of fellow enthusiasts! Some were very knowledgeable naturalists and botanists - so great to see how the experts key out a plant right there on the trail - what would take me 3 hours done in 30 seconds flat! 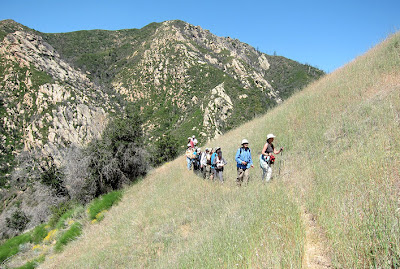 And below all I can do is give you a taste of the flora - not so expertly photographed as one might like. I was rather hasty in my snapping, I admit. In another post I'll show you some photos of the scenery around Tassajara and some of the wildlife.

The local sticky monkey is frillier and more apricot than the one where I live. 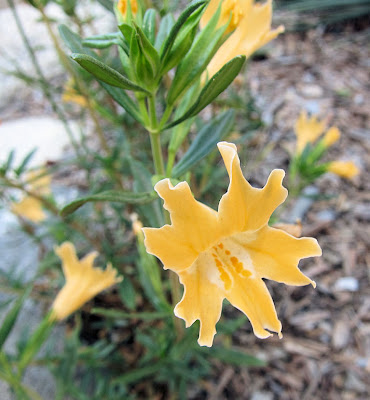 This black sage was in a garden so I'm not sure it is the local native kind we saw on the mountain. 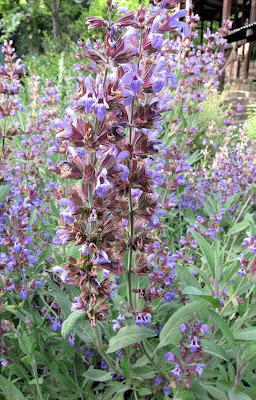 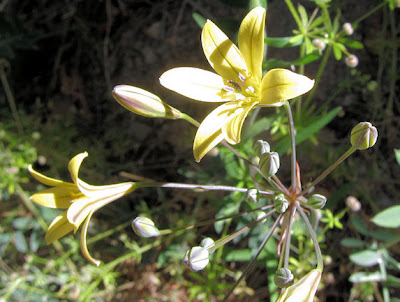 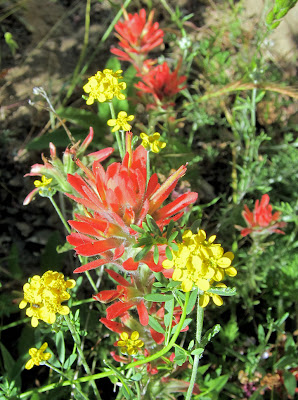 Here's another shot of that lovely combination, along with the beautiful sandstone rock that I just loved: 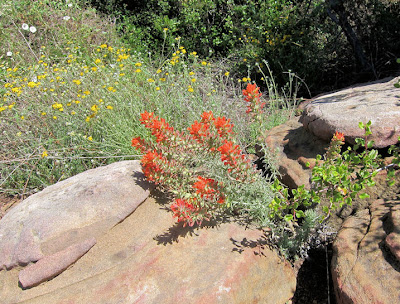 Lots of larkspur too, Delphinium parryi or D. patens, not sure which. (Also there was woolly blue curls a-plenty but I did not get a shot of it.) 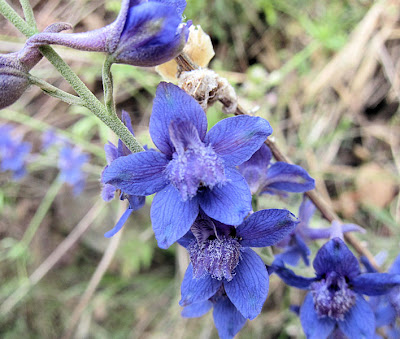 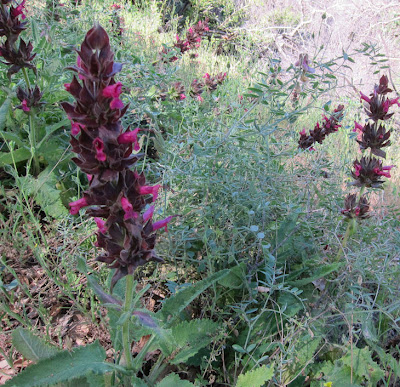 And yucca (Hesperoyucca whipplei) spiked up here and there in the mix, along with blue dicks, Dichelostemma capitatum: 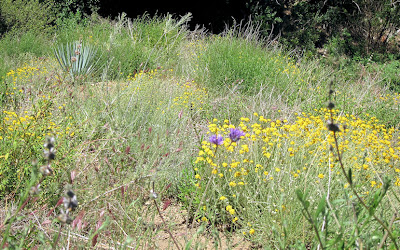 This looks like duddleya but I'm not sure what kind: 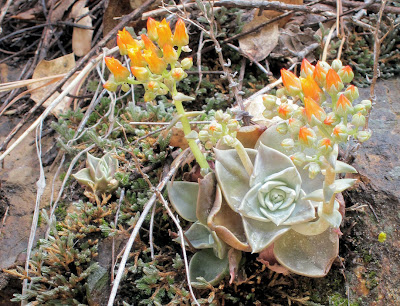 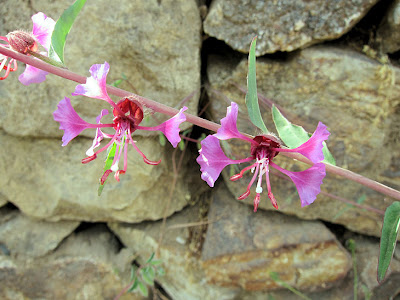 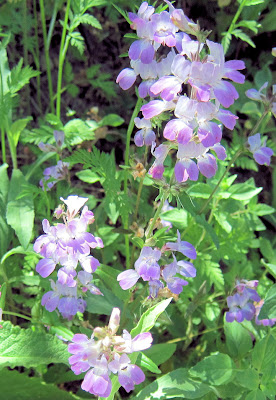 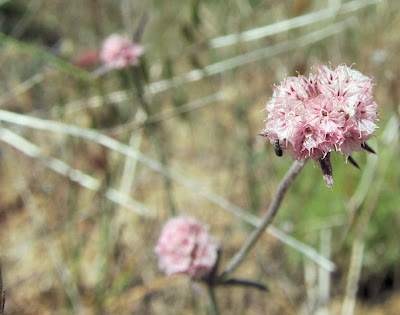 And many many more that I did not get photos of - how could one. And those I did were mostly hurried snaps, gobbled bites of color snatched in passing. Others took much better shots, and I did learn from more expert photographers too.

Well, next installment soon... I'll tell you more about what we learned about the effects of the Basin Complex wildfire - but now I'm being called to dinner. Thanks, Wood Rat for cooking while I blog!
Tassajara Wildflowers

Christine said…
No need to apologize for your photos- they're absolutely lovely! I especially like the shadows on the Triteleia. Wouldn't it be great if there were binoculars that could take photos of birds? (I realize there are crazy telephoto lenses, but that's getting a bit carried away, I think!) You sound so refreshed and well-rested!
May 18, 2011 at 9:31 AM

Country Mouse said…
Sue, I get a thrill too from seeing garden-planted natives in the wild - it's like this big surprise that nature can do this all by herself - weird!
Christine I asked the same question when I was there and was told that there are in fact such camera-binocular devices! http://www.consumersearch.com/digital-camera-binoculars - what a great idea! Also I heard that photographers with big zoom lenses just use them instead of bins to look at the birds.
May 18, 2011 at 9:57 AM

Byddi - We didn't come here for the grass... said…
Love love love the photos. The Clarkia is pretty cool and aren't Indian paintbrushes amazing? Thanks for sharing.
May 18, 2011 at 10:33 AM