Roaming in the Gloaming - in the Redwoods 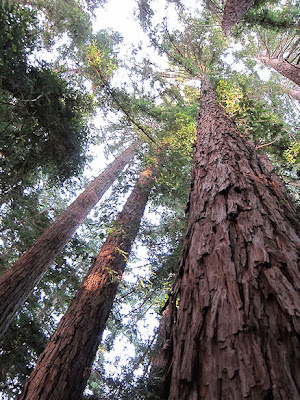 Wood Rat, Duncan and I have been doing our own bit of roamin' in the gloamin' after work, in these longer days we're now enjoying, and taking in our property, envisioning what we might do here and there in the future, enjoying what is there in the present, and regretting what has been lost in the past -- the old redwoods that were clearcut throughout the Santa Cruz mountains, leaving just some pockets of Big Trees saved for posterity in various state parks - near here: Forest of Nisene Marks, Henry Cowell Redwoods, and Big Basin Redwoods.

So, the other night we wandered into the small redwood grove behind my dad's cottage. It isn't really a grove - it's the appendix to a larger swathe of redwoods, all grown since logging days, that extends down the north slope behind our house. What we call the grove is a peninsula bounded by a path, a driveway, and the road. And it isn't really that small, when you think about maintaining it as a garden space. One day, though, we hope it will be somewhat groomed, with the addition of some understory plants such as Western Azalea. I've already started adding a few bits of interest to the edges.

Here we are entering the path down the middle of the grove, which begins behind my dad's cottage. 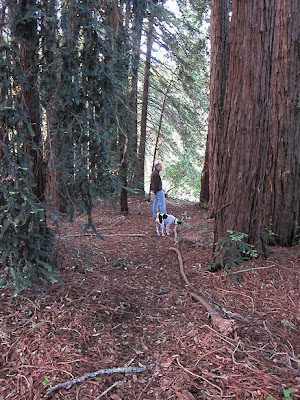 Here's what it looks like in the middle. There are lots of spindly small trees that we will probably remove. Some people advise us to do nothing, but in this area, we will very probably do something. When you clear the spindly ones, which will never amount to anything, you get nice areas that could hold a few seats, or a hammock. 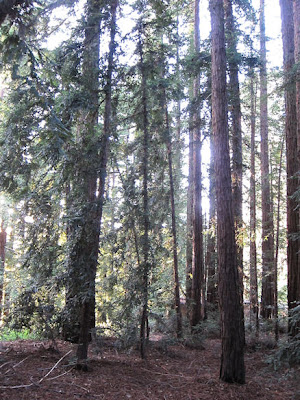 Near the bottom of the path - the white you see is the road beyond: 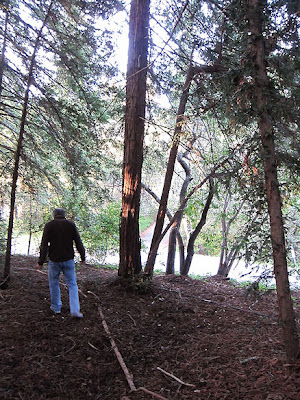 We need to fill in the edge here with some interesting shrubs and perennials. I'm planning to try thimble berry here, Rubus parviflorum, more sea foam, Holodiscus discolor, and not sure what else. I've also planted a bit of redwood sorrel, Oxalis oragana, near the top hoping it will take and spread. Also growing natively here, along the edges, is is yerba buena, Satureja douglasii; soap plant, Chlorogalum pomeridianum; Torrey's melic, Torreyana melica, and fairy lanterns, Calochortus albus (but not this year). And other native things - all of which I hope to encourage one way or another. I'll also check out the redwood habitat area of Town Mouse's garden for ideas too!

The side of the grove that borders the driveway has oaks, toyon, bay, madrone. And a few still very small Holodiscus discolor and thimbleberry, all grown from local seed: 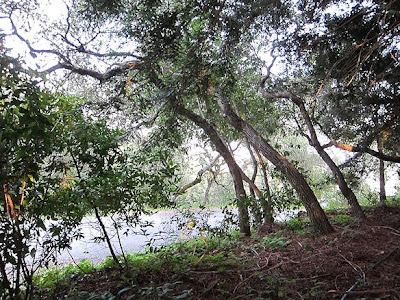 Time for another look up: 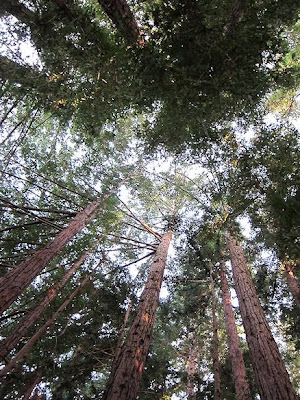 We take our coast redwoods for granted, forgetting how small - how narrow - their natural range is. Less than 500 miles long and 50 miles wide. Sequoia sempervirens. "Ever-living" - except when humans come in an cut them all down. I read that the origin of the name "Sequoia" is as follows:

... tree genus name given by Endlicher (1847), in honor of Sequoya (1760-1843), Cherokee man who invented a system of writing for his people's language, whose name is from Cherokee (Iroquoian) Sikwayi, a word of unknown etymology.

Well it's nice to have a genus named for a native American and not the European who labeled it. Just think, they could have been known as Endlicheria sempervirens! Oh, the wonderful giant endlichers, it just doesn't have that ring to it! Thank you, Herr Endlicher! (Though he does in fact have a genus named after him!) He was also a linguist, apparently - hence his interest in honoring this particular native American, I suppose. Oh, I love these little stories that attach to botanical names.

I also read this:

coast redwoods condense enough fog to provide a large part—20 to 40 percent—of the total precipitation inputs to the coast redwood forest. In other experiments, the team proved that redwoods could soak up this water through their leaves as well from “fog drip” at their roots, helping explain how they can grow so tall. (The two tallest trees on record are just under 380 feet.)

Also on that site you can read some good general info about coast redwoods.

I'm not sure what to do with the shrubby bits growing out from the bottom of the trees. I know Jeffrey Caldwell advised me about this years ago and I've forgotten his advice. Time to have him back up soon I think! 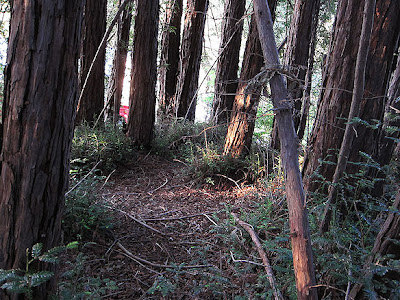 Here Duncan and Wood Rat contemplate the Rest of the Redwoods, across the pathway that goes from the house down to the corral. It is not likely we'll do anything down there other than pick up the fallen branches now and then -- just too much to deal with! It's fun to explore down there, though, scrambling on beyond our notional boundary line, where a sense of mystery and slight danger scents the air, and new wonders lie awaiting discovery. Maybe time for a journey down that way soon. 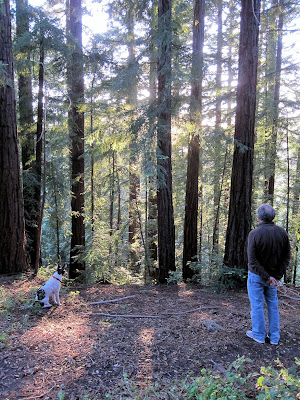 But first - potting on some plants that are going to have to last through the summer for fall planting - the ones I sowed as seeds last fall! I'll show you those for sure in another post soon. And the "bulb ravioli" area which is coming into bloom marvelously right now - so exciting!
redwood habitat

. . . Lisa and Robb . . . said…
The shrubby bits are the trees' future. If one of the large trees falters, it's daughters are there to take over. Plus, I'm sure that the small trees are a home to many woodland creatures.

Christine said…
How nice to have such a balance of potential in an already beautiful spot. Things can only get better from here! I'm still fascinated by the finding that Redwoods have a canopy much like the rainforest which supports smaller trees, plants and animals high up on its branches. (It was in a Ntl. Geographic last summer I think). Thanks for guiding us through the Gloam!
May 31, 2011 at 11:16 AM