NonGBBD blooms for May Day

Posted by Country Mouse on May 01, 2011
I missed the last bloom day, so here are a few pics that I would have put up had I had time to do that, and a few others taken since.

Plus - a free thrasher thrown in.

I'm publishing this post with some info missing on some of the flowers - because I want to get out in the garden. I cleaned up a bunch of containers yesterday and bought potting mix, and today I get to put stuff in them! Fun! Later I'll come back and edit the post for missing names, but I just want to get these blooms out in the sun, on this lovely May day morning. 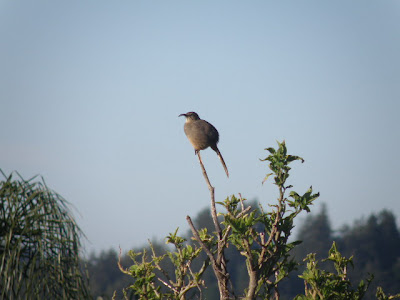 I love it when the thrasher sits with his big curved beak and sings his heart out in our garden - it's an incredible song, complex and melodious and more interesting than you can hear here on whatbird.com. 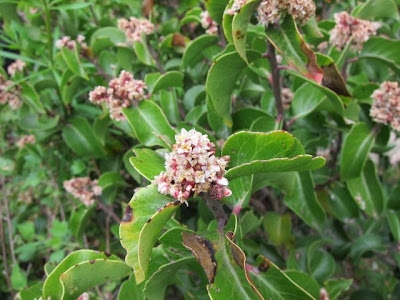 Above - sugar bush, looking a bit beat up with all the wet weather we had in March and early April. 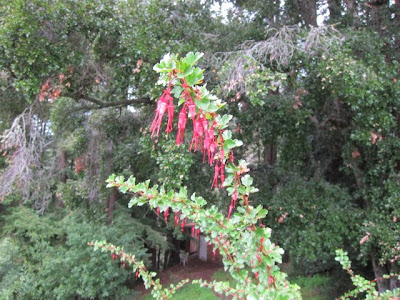 Still getting Ribes speciosum blooms into late April. May day today - and they're gone. 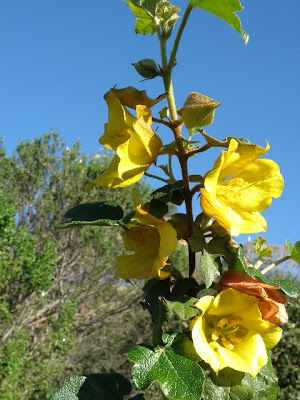 Fabulous fremontodendron, I love you! 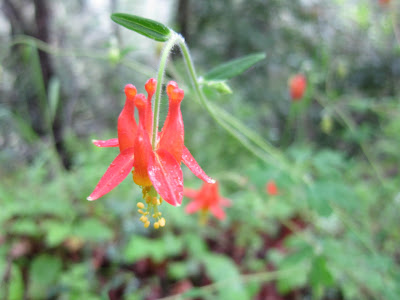 Not in our garden but just down the road - western colombine. 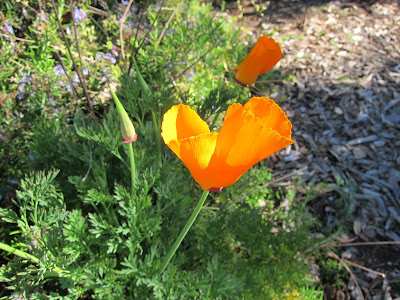 A california poppy, from nursery seeds. 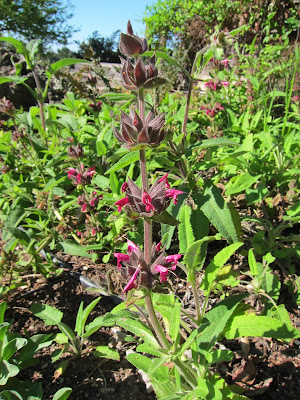 Hummingbird sage, Salvia spathacea. Colonising nicely. Now some seep monkey flower is blooming in its midst and I need to put more in there - the yellow and magenta look great. 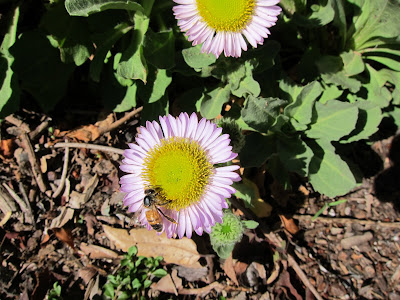 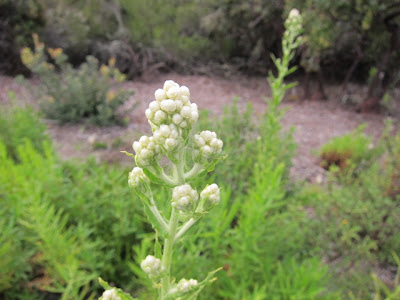 Wild Gnaphalium Californica just budding. They cover our hillside where we cleared a lot of chaparral fuel load. 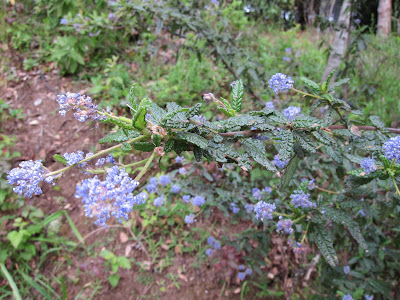 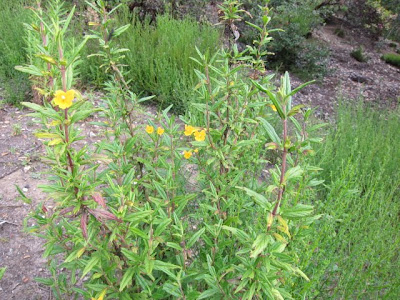 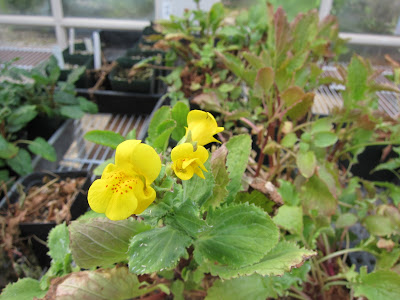 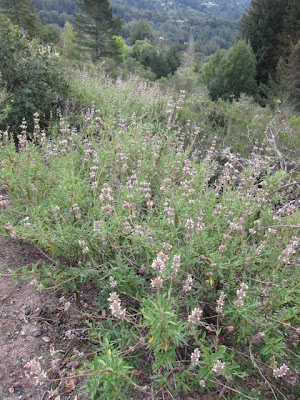 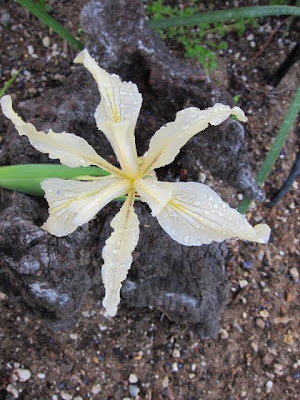 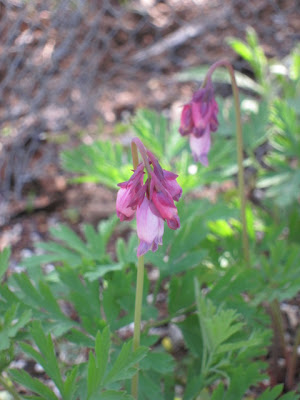 Western bleeding heart - my first year of these and they are growing nicely, even where no fence! Dicentra formosa. 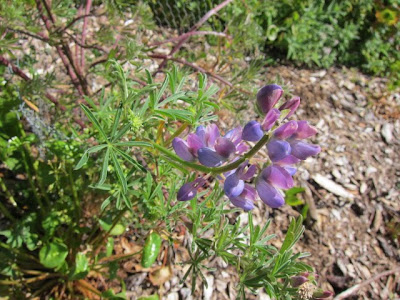 Lupinus aureus, blue version? not sure. From local wild seed. Anybody got an idea? Local native gathered here, 6 miles in from Soquel, on a ridge. 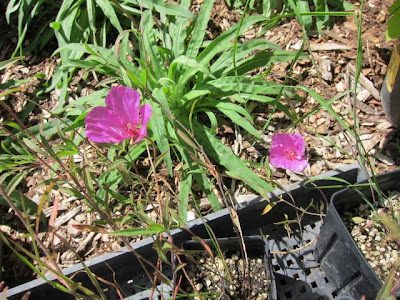 what kind of clarkia am I? I hope someone can tell me. 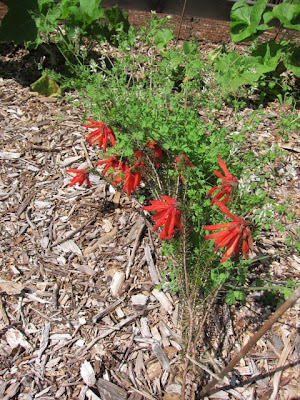 That cheerful heather - not a native. 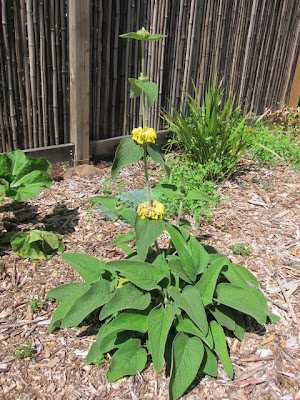 Another of those non-native ornamentals I planted in fall - lots of lovely blooms on a smallish plant, so far. 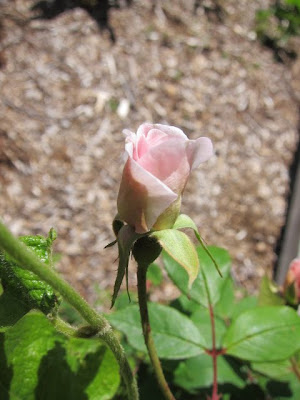 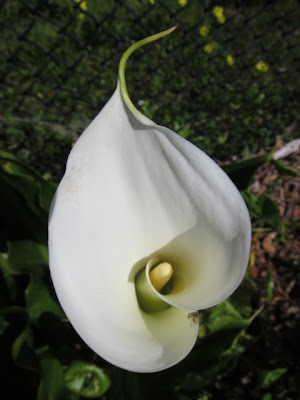 The damned calla lilies. I'm regretting letting them come back - not that I had much choice. I have purchased concentrated roundup, I'm so stuck for a solution here. They are coming up all over. Outside the fence as well as in. 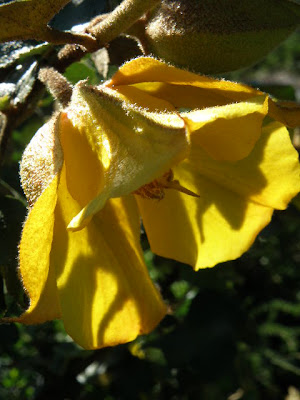 I like the light and shade on this shot of a fremontodendron blossom. 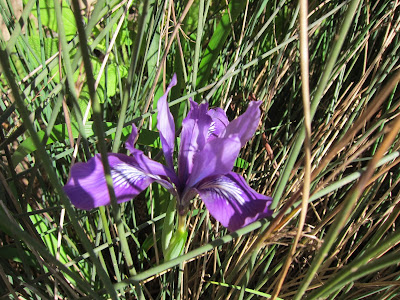 A nursery bought douglas iris that did not escape the eradication program! I picked it and enjoyed it indoors for a while - I want to propagate the Iris fernaldii, but now I'm not sure if any seeds will be hybrids. I also discovered another clutch of them that didn't get rehomed in Fall. Maybe have to dig them up next fall and start the breeding program then! 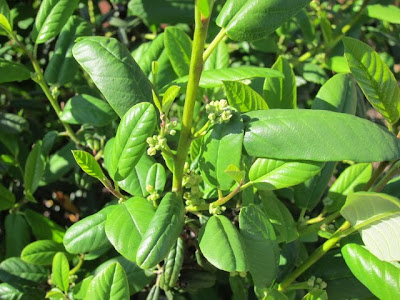 Barely visible, coffeeberry flowers abudding. The bees were all over them!

And that's it for now folks - I'm off to put thimbleberry and heuchera and golden yarrow and lupine and maybe even seep monkeyflower into some pots. Have a lovely May day!
Garden blogger's bloom day

Diana Studer said…
(At least you like our Erica). I have an arum lily that volunteered with a Strelitzia. Moved the bit I could dig out, and planted it in Apple Creek. But it is volunteering again. Is able to grow again from a tiny bit of root. I can only imagine how you must battle if you want to get rid of it ;~( Oh caterpillars eat the leaves, but I guess not your caterpillars?
May 1, 2011 at 11:12 AM

Country Mouse said…
Nothing eats calla lilies here. But bees do like it, and there are some pale spiders - ghost spiders? - that lie in ambush. A lot of those virgin white flowers are their graves - with many dried out bee carcasses in the bottom! Quite interesting.
May 1, 2011 at 12:05 PM

Sue Langley said…
Lovely photos, Mouse. I hope you find the clarkia ID. It seems unusual because the stamens are the ame magenta as the petals. pretty! I'd try to collect the seeds of that one and plant more. We have Gnaphalium Californica and I love the common name, 'Pearly Everlasting. That
Fernald's iris is lovely!
May 1, 2011 at 5:46 PM

Town Mouse said…
Oh, that all looks wonderful! Yes, the seep monkey flower really is quite amazing, mine is finally blooming as well and what an eye-catching color!
May 1, 2011 at 8:10 PM

Chandramouli S said…
A lot is happening there. I see the mouse is busy... really busy! Love that white non-native ornamental flower - lovely!
May 2, 2011 at 1:51 AM

Curbstone Valley Farm said…
I'm impressed the native monkeyflower is blooming already. Mine are perking up, but not quite that far along. I'm encouraged to see the hummingbird sage filling in. Ours just started blooming for the first time, and it would be wonderful if it fills in that space. Now I need to climb down the hill and inspect the coffeeberry. I wonder if ours is blooming and I missed it?
May 2, 2011 at 12:56 PM

Country Mouse said…
Hey, Lisa and Robb, I took them out because I want to propagate the local iris that grows here, which is a pale creamy yellow with lavender hints, Iris Fernaldii. Iris I, learn are notorious for hybridizing, and I want to grow the local wild ones as they are. So I had to take out the other iris for that reason. I was lucky enough to "rehome" all the iris I took out. Thanks for coming by. I did not yet update this post with names as I promised I would, sorry about that.
May 5, 2011 at 10:06 PM

camissonia (Arleen) said…
A very nice array of plants in bloom! I didn't know that Calla Lilies are invasive - I guess they are best appreciated as cut flowers or in pots, but not in the ground.
May 7, 2011 at 9:21 AM