Trouble in Paradise - part the first

Posted by Country Mouse on April 03, 2011
So the story behind my little April Fool's post about turning into a mouse...

Yes, we have a problem. On just one day last week I caught and released half a dozen California mice out of my office, one after the other. One of them ran around quite boldly right under my eyes - and my camera - and that was the source of the photos in the last post. 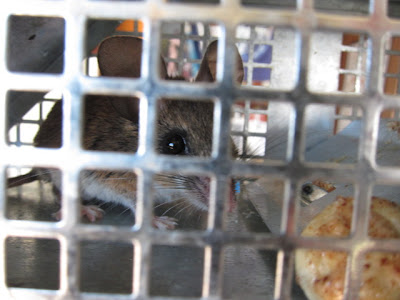 One might wonder if I'm taking six mice on a 1 way trip, or one mouse on six brief jaunts in the woods, with provided snack!

But as I watch them go off hesitantly into the underbrush with perplexed quiverings of ears and whiskers, I feel sad, knowing they'll likely be someone's meal before the next day is up. 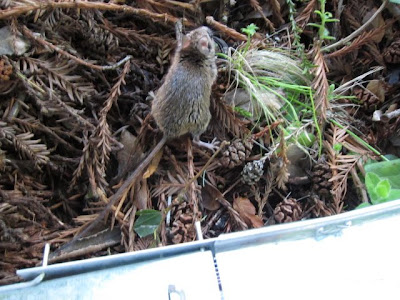 I release them all in roughly the same place down near the corral, so they can reunite and set up house in a nice hollow log or south wing of a dusky footed wood rat's mound. I know this is just a comforting fantasy (plus I'm still working on that children's book idea), but California mice, Peromyscus californicus, are very appealing creatures, not only to look at, but also in their behavior, from an anthropocentric viewpoint I mean.

They mate for life, and both parents care for the young till they are five or six weeks old. They have typically only two or three babies, but can have six or so litters mainly from March to September. They can climb and jump really well too -- I watched one jump in and then out of a pretty tall office waste bin, looking for my apple cores (I don't leave food in my room at all any more!). On the down side, they can carry diseases, such as the Hanta virus. Their territory or range seems to be about a third of an acre as far as I can gather from Internet searches. So I probably do need to take them farther off. I don't like going too far into the woods around dawn or after dark, but I'm going to have to.

I haven't caught any for a few days now, but I'm going to keep setting the traps. We also do need to find where they get in and stop up the hole or hole.

Mice are not my only woes lately, but I'll let you know the next sad story in another post. The life of a gardener is not always a rosy one, but one lives and learns better how to cope with setbacks.

grumblebunny said…
Adorable. I love mice. Can't help it. Those tiny pink feet! I catch and release, too, and hope against hope they'll survive in their new setting.
April 3, 2011 at 4:25 PM

Country Mouse said…
I'm glad I'm not the only one, grumblebunny, and incidentally I love your guinea pig guise!
April 3, 2011 at 4:33 PM

Anonymous said…
Yipes! Guess there's nothing for it but what you're already doing. One time a client was at my house and spotted a mouse running alonng the kitchen counter behind me. Oops, I just kept my cool, but knew somehow, I'd never seen those people again.

Chandramouli S said…
Though I am not lover of mice (because of the damage that they rendered to my garden), your post made me feel sad for those poor creatures. Nice to hear that you care.
April 11, 2011 at 7:42 AM

martha said…
What darling photos! But I know the little cuties can be a real problem from personal experience.

Years ago when I lived in a cabin in Fairfax (Marin County), I realized that I was overrun with mice when I found several dresses in the back of my closet with enormous holes in them (nesting material), and cereal boxes in the back of my cupboard with similar holes and no cereal! I put out humane traps and caught 5 or 6 a day for a few weeks. I took the traps out into the watershed lands and let the mice go, but always wondered if I might be catching the same one over and over again!

Garrison Keillor told a funny Lake Wobegone story around the same time, in which the person would drive several miles from his house with the trap, then get out and turn around 3 times to disorient the captured mouse before letting it go. He finally painted one of the toenails of the captured mouse so he could see if it indeed was the same one coming back into the house every time it was caught!
April 12, 2011 at 9:20 AM