Another new flower bed - in the south garden - Planted

Posted by Country Mouse on April 25, 2011
April has been a blur of overwork, taking me away from garden pursuits. Many seeds of garden thoughts lie buried in time, many a scribbled musing moulders like a cutting that didn't take. But I did manage a couple afternoons in the south garden, which is just starting to become a garden finally. I planted the new flower bed, which I marked out and blogged about in mid March, with graduates from my propagation efforts - All but a couple items are local natives grown from seed or cuttings! 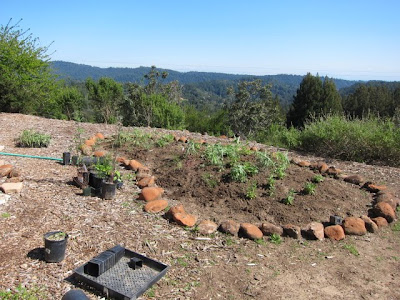 And Rat decided to gnaw off the 30-year-old upper deck that overhangs the South Garden. The south side of our six-sided house faces the ocean (6.5 miles off) and gets the brunt of the wet foggy or rainy winds, and that section of deck is in the worst shape. 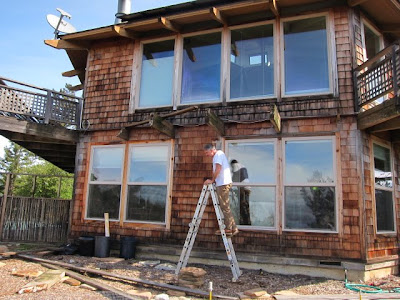 Such a considerate Rat! - he'll finish the work of replacing the deck before I start planting there, in fall.

Rat helped me do battle with the hardware cloth - we encircled the newly planted bed with a 2 foot bunny barrier. 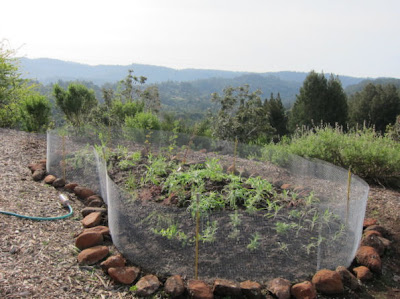 So far, the plants are surviving and starting to look a bit less forlorn. 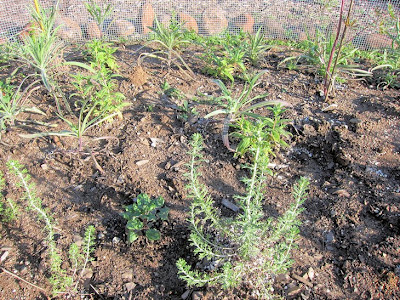 Above you can see some golden yarrow (Eriophyllum confertiflorum) in the middle at the bottom front, and to its left a little naked buckwheat (Eriogonum nudum). Behind it some local bush monkeyflower, (Mimulus diplacus). I freely planted these and also lots of common madia (Madia elegans). All the madia needed a home and I want to mass them so that native bees will find the bed attractive. To attract bees to the max, you should plant 10 foot diameter plantings of one type of bee-attractor plant if possible. The madia had been in pots too long and looked very floppy and straggly when I put them in, but look at them now, two weeks later! 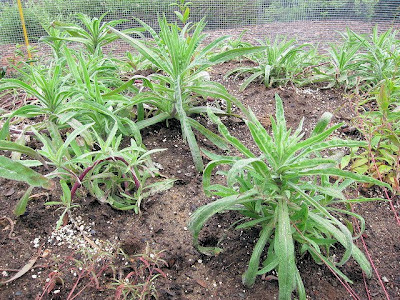 I hope they really ARE Madia elegans. Madia in general can be thugs in the garden, but I particularly want these to spread their cheerful yellow blossoms, and their seeds, far and wide.

And I put in three tall skinny lupines, a blue version of the Lupinus Arboreus I think, whose yellow version is invasive out of its native range. We are in its native range and you can enjoy masses of these yellow bush lupines along the coast, especially Wilder Ranch State Park. I hope these skinny-ma-linkies will bush out and be glorious!

I scrounged the greenhouse and the upper decks for candidates. I found a pot that had a bit of our native buttercup, (Ranunculus californica) and possibly a foothill penstemon, Margarita BOP (Penstemon heterophyllus) from seeds from nursery bought plants. Another pot had a bunch grass or two (Nassella lepida or Nassella cernua not sure which), and a small bee plant (Scrophularia californica): 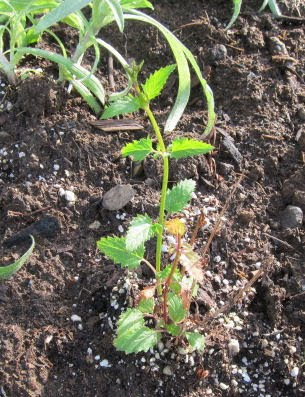 I found a couple of Torrey's melic grass (Melica torreyana) and put them in where I thought there might be a bit of shade from taller plants later in the summer, and some tiny annual lupines that I hope might return next year, Lupinus nanus, I think. 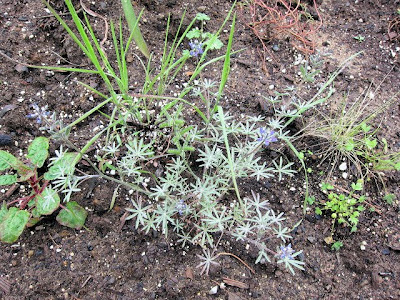 I also put a coffee berry (Ramnus californica) cutting that is growing fairly well on the far side away from the window: 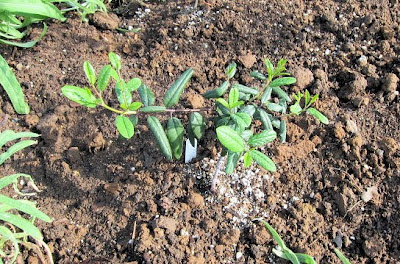 I have two other coffeeberry bushes volunteering in the south garden! I know we are not supposed to have shrubs in the fire defensible zone but but but there is so much other flammable stuff close to the house. The greenhouse for example! You just have to imagine the wind-whipped flames coming up either side of our ridge to know that a few irrigated garden shrubs are really not going to make any difference.

Other plants that went into the bed are California fuschia (epilobium canum) and clarkia - I'm not totally sure what kind our local wild clarkia is. Oh, and a few bulbs - I think they are Ithuriel's spear (Triteleia laxa, "Queen Fabiola") but I'm not sure. they're getting ready to burst into bloom. 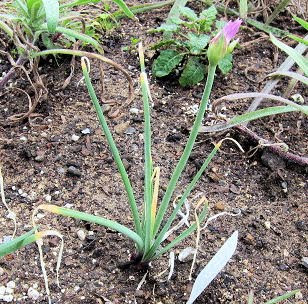 So many things I stuffed in that bed, just to see how they do. Time will tell! In fall I will make some decisions about the bed so it is less haphazard, based on results. Retrospective planning - it's a whole new thing ;-)

And I'm very happy to say I'm still seeing bunnies - but NOT in the planting bed. 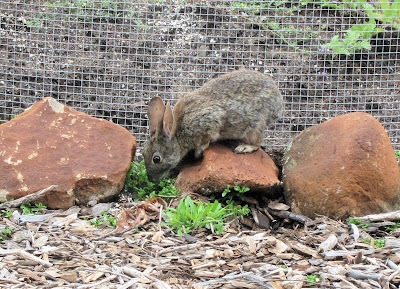 Sue Langley said…
I always enjoy the posts about what you plant. We can plant the same things. The Madia does look nice and sturdy and the same size as the native seedlings here.
I like that kind better than my Heermann's tarweed, which I'm trying to reduce because it competes with the native grasses. It was so surprising when going out to photograph it one day. It was gone! The flowers totally closed up by noon, appearing only mornings and evenings. So pretty and the smell is so soapy and nice in Fall.

Curbstone Valley Farm said…
Quite the collection! I'm glad you managed to make it up and away from your computer for a bit. I'll be curious to see how the Madia elegans does for you. The local Madia I have here is decidedly unruly. I've thinned it in areas as it's annoying to walk through in the orchard, but darn the bees love it. My bee plant however spent most of last year being mown down by the checkerspot larva. That's the funny thing about host plants, I need to remember to plant more of them to make up for the ones that get eaten! ;)
April 25, 2011 at 5:38 PM

James said…
Maybe I've seen too many cartoons, but I always thought that bunnies hopped. I'm glad two feet of mesh does the trick. If my suburbia has its perks, lack of bunnies must be one of them. As always, it'll be cool to see these plants fill in the bed and start reproducing themselves.
April 25, 2011 at 8:52 PM

camissonia (Arleen) said…
A really nice selection of natives you have in that bed! Even though I generally have a soft spot for bunnies (cute little tykes), I occasionally lapse into bunnycidal thoughts whenever I discover that they've mowed down my brand new plantings. Chicken wire is de rigueur in my garden.
April 25, 2011 at 10:32 PM

Chandramouli S said…
It's growing well, and I see you're growing quite a variety in that bed. I can image how great the bed'll look when in full bloom!!!