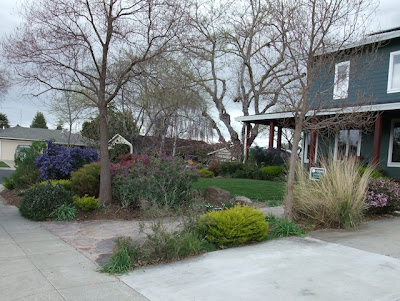 Not too long ago, I received an invitation from the Loma Prieta Chapter of the Sierra Club to attend an open house of the Greenest House in the Santa Clara Valley. The house,  which received a greenpoint rating of 309 may well be California's greenest home - at least if you believe the owner, who is also the developer who built the house and who discusses the house here.

Don't get me wrong - the house was amazing. I loved the central lightwell, a big high-insulation skylight. I appreciated the different ways in which appliances and the bathrooms had been selected to consume minimal amounts of energy and water. At the same time, the house was aesthetically appealing, beautiful colors had been chosen for both the outside and inside (no-VOC paint, of course). I also very much enjoyed meeting some of the good people in the Sierra Club chapter, and a young woman from Acterra who is working on activism.

It did my heart good to see so many people so excited by the idea of considering to do things with their house that were good for the environment. And yet... As I was coming in, one of the many labels explaining green features said "Native Drought Tolerant Landscaping". 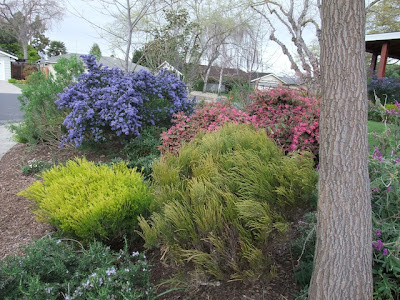 Well, it was dark at the time of the tour, and what I could see was Mexican sage, breath of heaven,  loropetalum, and rosemary, also some tall non-native grasses and something that looked like daylillies. "Where are the natives?" I asked Randy, one of the employees of the builder who was showing the house. "Oh, I have to take care of something, talk to you later," he replied and hurried away.

In the back, I found Japanese maple, bamboo, and one lonely Berberis (plus another "Native Drought Tolerant Landscaping" sign). I continued the tour, had a few nibbles, admired the butcher block kitchen island and the bamboo floor and went home puzzled. 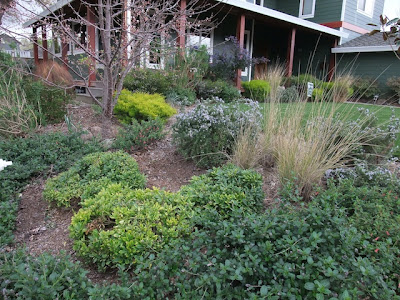 The weekend after I drove to the house in  daylight to find that yes, the garden in front did, indeed, include a few natives. Two medium-sized ceanothus (dark star maybe?) and three low-growing ceanothus plus a manzanita made attractive highlights in the spring garden. Would I call this Native Drought Tolerant Landscaping? No, I would not.
And here's the truly amusing wrinkle to this garden's landscaping story. Until just a few weeks ago, the garden had a bunch grass meadow, but the decision was made to replace it with -- yes, you guessed it, artificial turf. 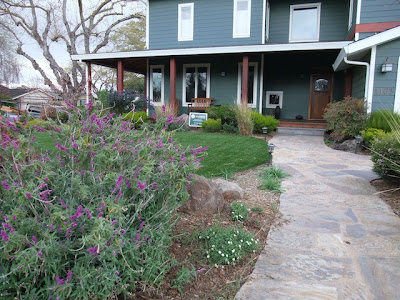 A sign proudly proclaimed it was "heavy metal free artificial turf", but I was tempted to ask the question "what's it made of?" Yes, friends, oil is the mother of all plastic and artificial turf is plastic. I'm also wondering how green the turf will look in a few years. And I was disappointed (though not surprised) to find that, despite the claim that the owner's children and dog did not enjoy playing on the lumpy bunch grass meadow,  no children were frolicking on the plastic lawn when I came for my photos.
I sent the owner of Earth Bound Homes an email suggesting that we'd all be happier if he would change his sign to say "Drought Tolerant Landscaping", and I invited him to the Going Native Garden Tour, which would offer an opportunity to see true native landscaping.
But noone likes an uppity mouse like me giving unwanted advice and I have, so far, not heard back.
In spite of all that, I highly recommend you go see the house if you have the chance -- it's inspiring and beautiful and you'll feel as if this good earth matters to others as well (and if you go, just bring a red pen and cross out "Native" on those signs).

James said…
What a disappointment with the garden. They could do better. Hopefully the interior isn't subject to the same sort of greenwashing that you observed on the exterior!
March 19, 2011 at 10:07 PM

Chandramouli S said…
The house sounds like a great construction, but I wouldn't say so about the garden. Again, it wouldn't be fair of me to judge it unless I see better angles. Great to hear that you did your part to correct them, but unfortunately not everyone is okay with others pointing fingers at their work.
March 20, 2011 at 2:19 AM

Katie (Nature ID) said…
Thank you for posting this and offering you opinion. I toured 2 "green" homes in the past few years and was very disappointed, not only for the lack of native gardening. One was the Sunset magazine home in Monterey County where they couldn't be bothered to line up the spigot so that the water actually fell into the tub - yes, being anal, I actually turned the faucet during my tour b/c it didn't look right to me and I discovered most of the water flooded the floor - not exactly water responsible. The other was done by a friend who received $1.5 million to renovate a house that now has an $800 electric and gas bill every month. Green? I don't think so. It's another marketing ploy to buy products.
March 20, 2011 at 7:55 AM

ryan said…
Pretty weak and un-green that they are calling that native and drought tolerant. When I see that native drought tolerant label thrown around so much, I understand why there have been so many battles over the word organic. Same with green ratings. On the one hand it maybe waters the green label down when people use it so much and not always accurately, but on the other it does help mainstream the practices.
March 20, 2011 at 12:18 PM

Diana Studer said…
And the new gardeners will go home happily reassured that ... rosemary, bamboo, 'Japanese' maples (one of mine has died) are drought tolerant and native to California. So 'our garden' is too ;~((
March 20, 2011 at 12:34 PM

Heather Holm said…
I'm glad you wrote about this. We have toured several LEED Certified homes and businesses here in MN and the landscaping in each instance reflects what you saw. None or very few natives. I need to read more on the point system for this Certificatiion but it seems obvious that they 're not giving out many points for the landscaping so it is often done quite poorly.
Heather
March 20, 2011 at 6:36 PM

Brad said…
Good for you on the critique. I went to a green in-law cottage here in the East Bay that was described with a lot more hype than it really warranted. Calling the yard native is just false advertising and is not ok. And the artificial lawn in a private yard is not ok either (though i can see the point for soccer fields or other truly high traffic areas). I think that being "green" has become somewhat of a status symbol, which would be good if it actually meant true changes in behavior instead of pretty facades.
March 20, 2011 at 8:33 PM

Christine said…
It's sad to see a movement degraded to a marketing blitz. The greenest home is one that is already built (while adding energy saving components to it)- it's a matter of consuming less and working with the resources that are already there. But alas, shiny new doodads are way more fun (and profitable). That lawn is just an insult to the garden. I really don't see how a plastic lawn is sustainable. Native grasses are available in sod, but perhaps they're cheaper than this plastic stuff. Have to think of the resale value!
March 21, 2011 at 10:26 AM