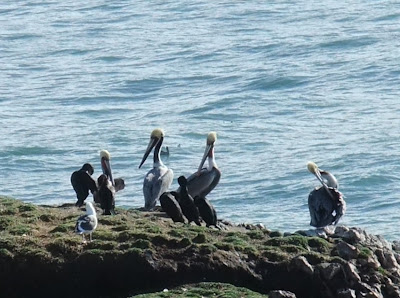 Because our house is still in disarray, Mr. Mouse and I decided on a little outing for the week after Christmas. For a long time, we'd been planning to drive down the coast and see the Getty. Was this going to be the year?

We started early on December 26 and drove down to Big Sur, where we had reservations at the Big Sur Lodge, right inside Pfeiffer Big Sur State Park. With no worries about lodging, we could stop along the way, and decided to do some hiking at Andrew Molera State Park. After a pleasant lunch of leftovers, we set out on a trail that brought us right to the ocean, with views of pelicans on one side and views of the Big Sur coastal mountains, with the last of the clouds from the big storm. 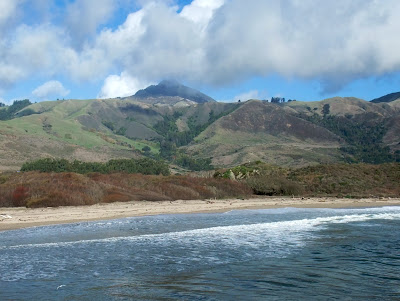 Unfortunately, the trail we had meant to do was not accessible so we ended up going on two smaller hikes. The first hike, right at the coast, was especially memorable, with ceanothus, artemesia, and several different kinds of succulents clearly enjoying the sandy soil. There were even some late asters and yellow-blooming compositae along the trail. While the ocean laces the air with salt, it also evens out the temperature differences so more plants bloom longer. 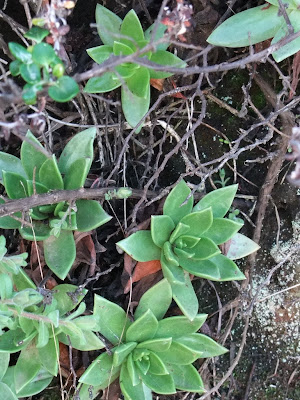 After a night in our well appointed Big Sur Lodge cottage -- we even found a place to plug in the car -- we started fairly early to have time for a hike at Limekiln State Park at the South End of Big Sur. Two trails were open, with both trails together about 3 miles. Both hikes were stunning, along gushing little streams with majestic redwoods, huckleberry, ferns, many different fungi, and even a banana slug. 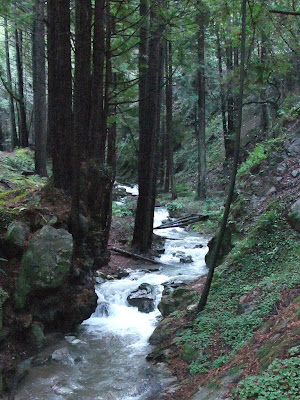 We had a lunch date with a friend in Cambria, but were able to hike both trails, make a few photos, and still get to lunch on time. For lunch, we sat outside in the sunshine, ate very nice food and talked and talked. Mr.Mouse ended up with a bit of a sunburn, clearly, we were not in Northern California any more.

Our next two nights were booked at the Cheshire Cat Inn in Santa Barbara. We had a spacious room and enjoyed the friendly staff, generous breakfast, comfortable surroundings (and a place to plug in the car). Some bed and breakfasts are a little overdone, with potpourri on every flat surface. Cheshire was not like that. Sure, they had a Christmas Tree with Alice in Wonderland ornaments, and a few other whimsical touches. But mostly, the decor was sensible, the food abundant, and the staff inviting and helpful.

After an early dinner, we fell into bed after such a long day. The next day, re-energized, we started right after breakfast for a trip to the Santa Barbara Botanic Garden. 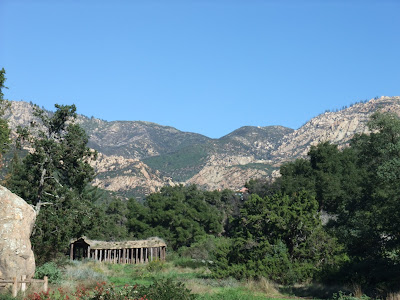 Nestled in the foothills, this is a big garden, more a cross between a botanical garden and a park.  Used to the fairly small, carefully weeded Tilden Regional Park, I was a bit surprised to find Oxalis pes-caprae and some other invasives sharing the space with the many beautiful natives. But who can realistically expect to weed an area that large?

Here are some highlights:

A labyrinth shade structure with a green roof, shown in the photo above. 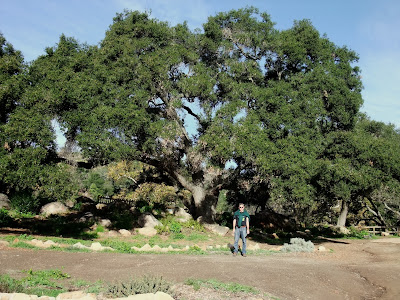 A surprising number of blooming plants including Verbena liliaceae, Eriogonum  grande rubescens (buckwheat), some early ceanothus blossoms, and some manzanitas. 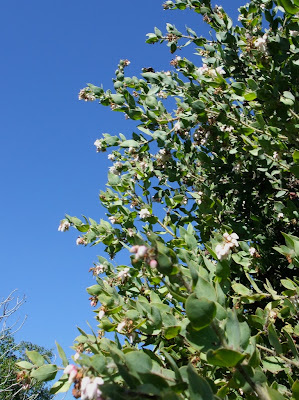 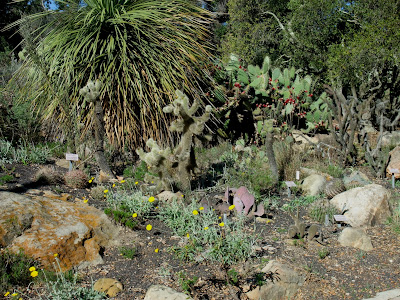 A canyon with a small stream, different riperian and woodland plants, and, a little bit up a hill, different channel island species. At the edge of the woodland, a truly stunning native grape, or possibly the 50% native 'Roger's Red'. 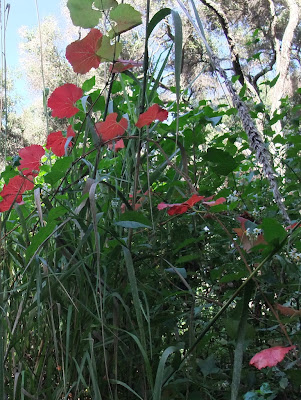 A demonstration garden, which showcases different groundcover and pleasing designs using succulents and other native plants. Here a 2-3 foot high groundcover consisting primarily of low-growing ceanothus and berberis. One could call this overplanted, or one could call it a clever way to get some green into the dry garden. 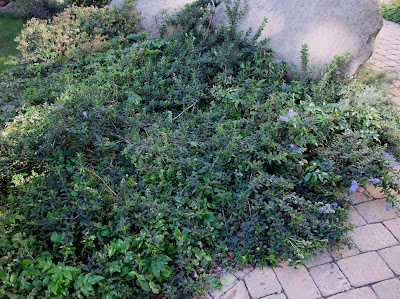 A ceanothus garden from which one can look out over the town, the ocean, and the channel island on a clear day. With the recent storms, the view was spectacular. 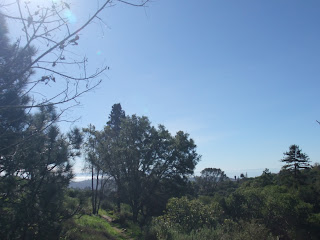 After we had enjoyed the beautiful garden, Mr. Mouse and I stopped by the Natural History Museum, which had a fascinating exhibit about coffee and exhibits about the local Indian tribes. Interestingly, the Santa Barbara area Indians had a much more advanced culture than the Oholone Indians, most likely because of the more benign weather and the great fishing in the area.

We then spent the afternoon visiting the courthouse and walking around downtown, where I took my final photo of palm trees, an exotic rarity up here, and very common down in Southern California. 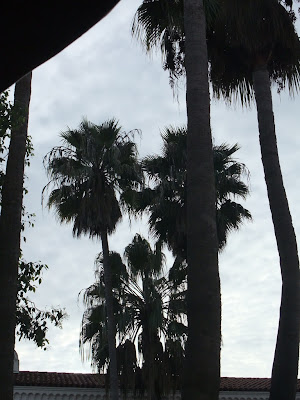 Next day, we left to drive further south.

Did we make it, or did the fierce storms stop us along the way?

Carol said…
Gorgeous landscapes and Oh, the Oak!! Wow! What a great trip. Beautiful photos. Kudos to you for having a plug in car. I hope you did not get caught in a storm.
January 6, 2011 at 6:09 AM

biobabbler said…
Oh, my. How delightful. And tho' I realize this is mostly about plants, OH how I love and miss winter pelicans with their blond crew cuts. And that huge oak is AMAZING. Glad you got such beautiful weather!
January 6, 2011 at 12:06 PM

Christine said…
What a grand trip! I love the Dudleyas you found, but then again you know I'm a sucker for Dudleyas! How are they coping after the fire a few seasons ago? I remember hearing that a structure or two burned down and they lost some collections. Glad you made it there- it's certainly on my list.
January 7, 2011 at 8:18 AM

Country Mouse said…
I love how you say "make photos" instead of "take photos" - so much more constructive and less - rapacious! Amazing how much stuff is in bloom already. I enjoyed the vicarious pleasure of participating in your trip review - look forward to the next part.
January 7, 2011 at 8:55 AM

Curbstone Valley Farm said…
That grand oak makes every single oak here on our property look like a pathetic excuse for a tree. Wow.

I love that the Town Mouse stayed at the Cheshire Cat Inn, too funny.

Every time I drive south of here in the winter months I'm always surprised at how much is blooming and growing. I honestly think Santa Barbara has one of the most perfect climates on earth.
January 7, 2011 at 3:35 PM

Town Mouse said…
Ah, well, I went incognito Curbstomevalley, they did not know I was a mouse.

Country Mouse said…
ya fungi amongi just doesn't sound the same. I'm hoping to get to the fungus faire tomorrow, Sunday, in Santa Cruz where I can say my saying frequently and with a big grin on my face!
January 8, 2011 at 3:39 PM