Posted by Country Mouse on January 23, 2011
Of dune blooms there were few last weekend at Asilomar. After the past week of glorious ersatz summer weather though, I bet there are a lot more now. I am for sure going to to back in April to see the full show. 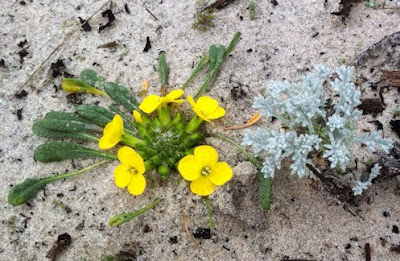 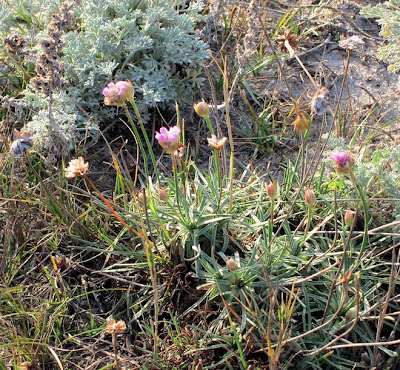 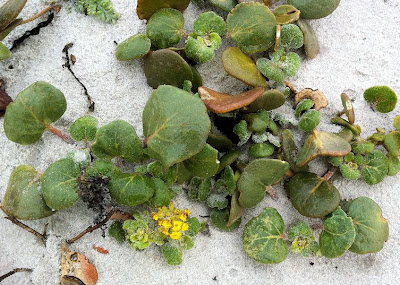 Last year's yarrow, making a nice study in texture, with that brownish grass (which might be a sedge - I'd really need a guided tour to ID the grass type plants): 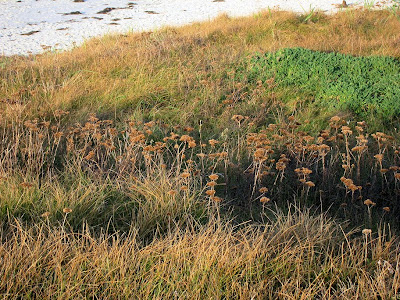 I think this grass is Leymus mollis, based only on other similar pictures on the net: 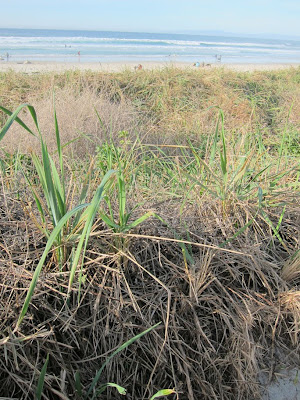 We saw lupines but not flowers, so I don't know if they were the rare Tidestrom's lupine (Lupinus tidestromii), or the tree lupine (Lupinus arboreus), which I gather can itself be a bit invasive - not quite sure of the story on that one.

But what was fun to see were the propagation projects in action. At first we thought some creature had been digging holes around the place. 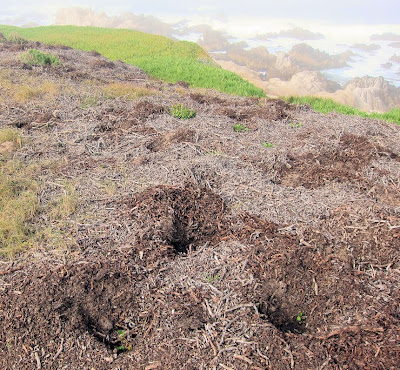 Then we looked closer - 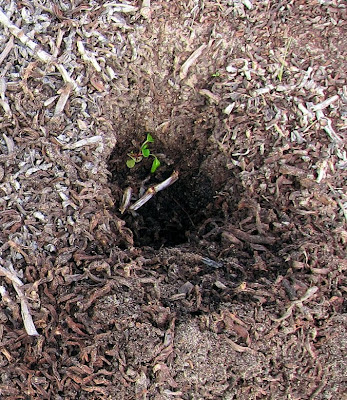 Seedlings, very small - planted in holes rather than on berms. To stay out of the winds, of course! It's an iceplant eradication and restoration area. Here's a different baby, not sure what these are really. 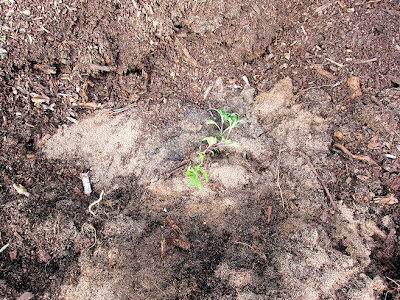 In this slightly more inland area, some shrubs probably, in the white tubes. I'd love to take a guided tour next time and find out more about what's being planted: 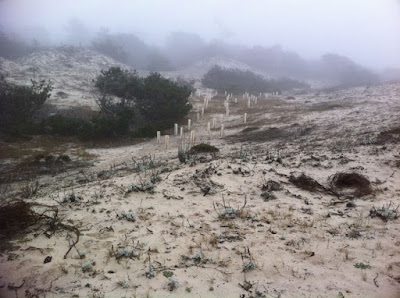 They are in a swale, and here's a nice tidbit about the sand and soil from the California Native Grassland Association page I recommended in my first Asilomar post:

While most dune systems are created by fine sediment deposits from river systems, the sand at Asilomar is derived solely from the underlying granitic bedrock. This gives the dunes their pure white color and makes them relatively nutrient-poor and inhospitable to most plants. In contrast, swales (the areas between dunes) have more developed soils.

So in the swales you can see different types of plants - very interesting. I didn't think about the different zones in a dune area.

At one point on the walk, up near the Pebble Beach golf course I think, the dunes were on the move: 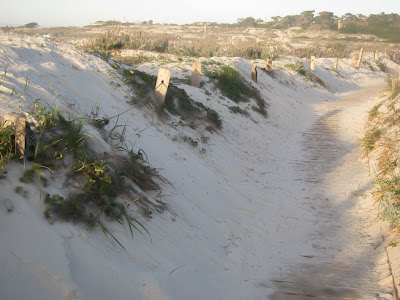 I know the restoration efforts aim to stabilize the dunes, and I suppose they used to be more vegetated and stable. Here the plants seem to be fighting a losing battle!

We headed back to our room and passed some acorn woodpeckers enjoying the moon (or a bug) high in a snag: 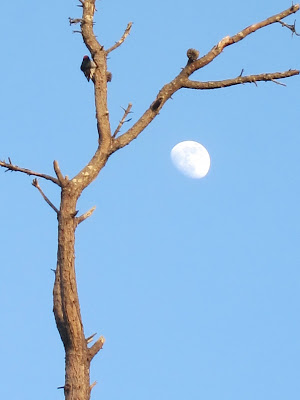 Next morning was misty when we headed out. 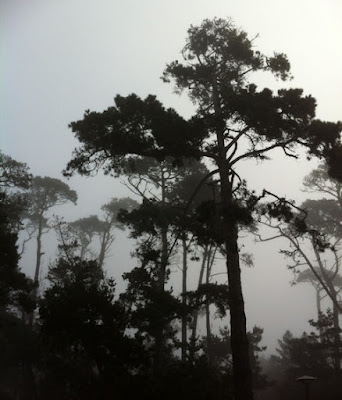 I enjoyed a peek into the Asilomar State Parks shade house - would love to know more about those yellow ridged tubes that encourage root growth... 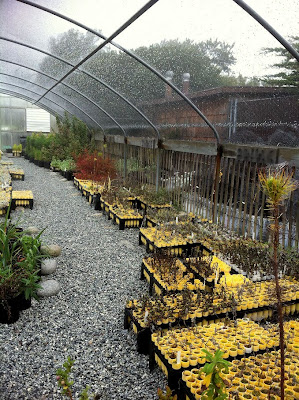 In closing here is a photo taken from from the balcony of our room at Asilomar - a black tail deer, with a respectable rack! 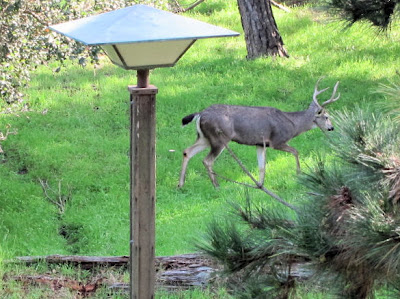 Christine said…
Gorgeous photos! I can't wait to see your take on your return trip, armed with the information you've accumulated so far. I love the moonscape of the dunes with the white sand and dark silhouettes of plants.
January 23, 2011 at 9:29 AM

Kelly said…
The first plant you show in the hole is Eriogonum parvifolium. It is one of the plants I have propagated for dune restoration that is taking place this weekend and the next two to three weekends. I don't recognize the second little plant.

I love those seed tubes, too. In fact I emailed the leader of the beach garden project this morning to find out a source. I would love to have my own!
January 23, 2011 at 2:55 PM

camissonia (Arleen) said…
That is one awesome picture (the seemingly black & white one) of - are they pines or cypresses? Reminiscent of Chinese brush painting.
January 23, 2011 at 10:01 PM

Curbstone Valley Farm said…
Another interesting post CM. Regarding those tubes with the ridges, Peaceful Valley sells some (theirs are black, not yellow). My understanding is they're usually used for tree seedlings, and other plants with large root systems, and the ribs/ridges help to prevent the roots from spiraling. This provides a healthier root system at transplant time. I have some on order for my Pacific Madrone seedlings that I'm starting.
January 24, 2011 at 2:17 PM

lostlandscape (James) said…
Ah, a beautiful, misty day at Asilomar! I'll have to admit that I tend to look so much at the water that I haven't learned the dune ecosystems as much as I'd like to have. My local native plant society chapter is probably going to be doing some coastal surveys this year, so I'm looking forward to participating and learning more.
January 24, 2011 at 9:42 PM

Dave of the Coonties said…
A number of years ago, I edited a recovery plan for endangered dune plants at Asilomar. It's good to see that restoration of the old sand mine area is continuing.

On the side, I was at Heathcote Botanical Gardens today, restoring a path above the Japanese Garden waterfall by removing encroaching shrubs and bamboo.
June 15, 2011 at 9:20 PM