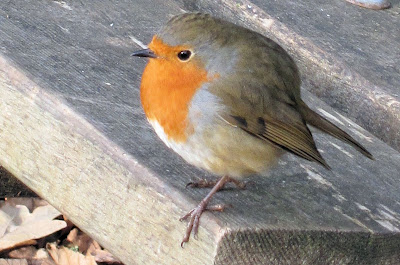 I'm spending a few days on the so-called "English Riviera" with my older daughter and her family, who live in Paignton. Given the current cold snap in the UK, a more apt moniker would be South Coast Siberia.

Nothing daunted, on Sunday we all wrapped up and enjoyed a day out at Paignton Zoo.

There were so few visitors that the animals were bored and came up to have a good look at US. Even the local wildlife - like the little fluffed up robin at the top. So wonderful to see a "REAL" robin, the British Christmas card bird. (As opposed to what is also called a robin in the US.)

My soon-to-be-six-year-old granddaughter shared a picture she had drawn with a monkey who seemed quite taken with her masterpiece. 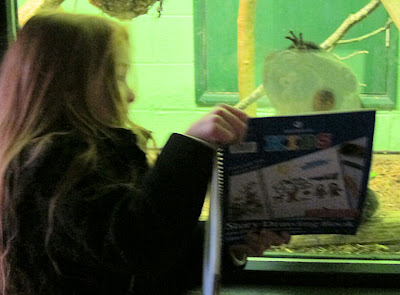 And my grandson, three in April, got his wish to get up close but not too personal with a "nine-oh-saur!" AKA saltwater crocodile: 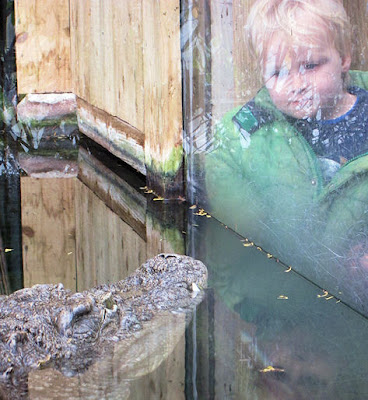 As we wandered about, I noticed some California natives. Here's a snap of a healthy Garrya elliptica, silk tassel bush: 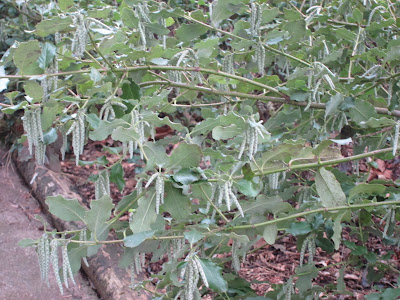 Many of our California natives are happy garden plants in the mild south west region of the UK.

I also saw a shrub with ceanothus like leaves but didn't quite recognize it. The zoo is also a botanical garden, and has a database of its plants. Here are all the species of Ceanothus you can see there:

I've never heard of that last one and while it is listed on calflora.org, there are no pictures of it - not anywhere on the internet! I wish I had taken one! Maybe it is rare and endangered? My daughter says she'll see if she can get a photo for me.

I found this statement on the zoo's Botanical Gardens page:


The staff at Paignton Zoo Botanical Gardens have signed up to Plants for the Planet, supporting the Global Strategy for Plant Conservation.

To pledge your support visit http://www.plantsfortheplanet.com/ and sign up today!

I did visit and signed up. I discovered that the Global Strategy for Plant Conservation is an initiative of BGCI, Botanic Gardens Conservation International, a group that is new to me.

It seems that botanical gardens these days have a mission to save plants from extinction, just like zoological gardens now focus on preventing animal extinction, rather than providing entertainments such as the chimpanzee's tea party, a regular event at London Zoo in the days of my youth.

(CNPS also has a Rare Plant Program with a similar mission.)

Paignton zoo also promotes wildlife gardening, for biodiversity. Near this dead tree with its impressive fungus: 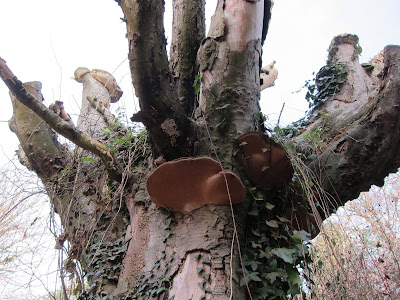 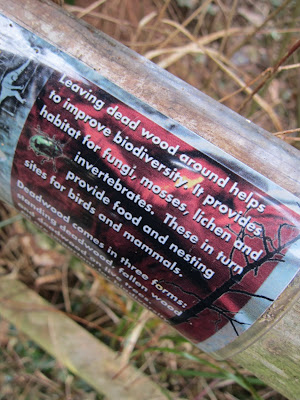 In typical British fashion, the deadwood is classified into three types: standing, fallen, and deadwood on live trees.

British signs are wonderfully formal, in general. Here's a couple from the zoo's restaurant: 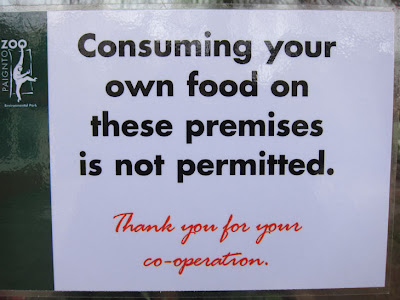 I also saw this box - similar to what we would use for native bees, but there was no sign so I'm not sure who was being invited to take up tenancy here: 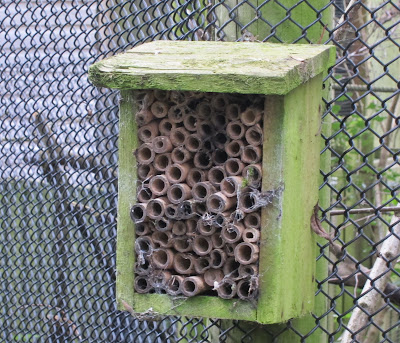 And I got to have a cheese and onion pasty (pronounced paahsty) for lunch - a taste of home that whisked me back to college days.

Yes, a great day at the zoo was had by all. And tomorrow I begin the long trek home. I am looking forward to checking in on all my seedlings. Oh - and seeing my family too, of course!

lostlandscape (James) said…
How funny is that to go to the UK to visit California, but they've of course got a proper appreciation of many things Californian. C. Xveitchianus was an interesting puzzle and I went off to see what it might be. The big "X" screams natural hybrid, but there seems to be some confusion about its parents at least in the popular realm. Also the name Veitch was also an interesting historical side note worth chasing down (see the last quote)... Anyway, stay warm and enjoy the "real" robins--I expect there would be several hundred thousan people who might argue that one!

Country Mouse said…
Thanks, James, for checking up on that odd ceanothus - I wonder who Messrs. Veitch were? Those Victorian collectors!

I'm on my way home now and am installed in a cosy "yotel" room at heathrow airport -- my flight leaves too early for me to have made it up here from Devon on the same day. It's kind of like a small cabin on a ship, I imagine.(The only ships I've stayed on being freighters, I can't say for sure!)
December 28, 2010 at 2:36 PM

Curbstone Valley Farm said…
I'd read that Ceanothus were wildly popular in the UK, although honestly, I don't remember ever seeing one when I lived there.

A relative sent us a holiday card this year with a beautiful photograph of an English Robin. I so miss seeing them perched on a garden fork handle in mid-winter. The American Robins just aren't the same, and closer in size to an English Thrush! Oh, your cheese and onion pasty though, so jealous! I hope it was as good as I remember them ;) Happy New Year!
December 29, 2010 at 1:29 PM

Country Mouse said…
Pasty was yummy indeed - a unique flavor not encountered in the US (by me anyway)!

Ya, I know: common names are fine where ever used - all that is required is agreement by the people who use them. But I do love those tiny perky birds and to me they are robins, and the US ones are "those birds that remind us of robins in the old country" - we carry our childhood experiences within us, I guess.

When I was looking for more on bee houses in Europe, I stumbled onto this site: the Barefoot Beekeeper,
http://www.biobees.com/.
I wonder of any of our beekeeping readers know of this "top bar" beehive method. I hadn't heard of it before and might look into it a bit more.
December 30, 2010 at 7:59 AM

healingmagichands said…
I enjoyed my virtual trip to the zoo. Looks like that was a mason bee nest, doesn't it?

Hope your trip home was without snags. . .