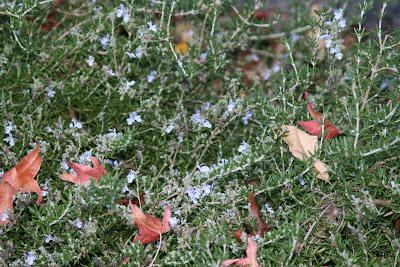 ...Something blue. Yes, the Town Mouse garden is offering Rosemary, a final snack for the hungry bees, as the blue thing. But nothing new. Not very much has changed since the October Garden Blogger's Bloom Day. In contrast to the hills, which had 3-5 inches of rain, we've had around 0.48. And while we've had cool nights in the low 50s, the days have been in the 70s.

I planted the lavenders I bought a few weeks ago, but it was a battle to get holes into the hard-as-concrete clay. 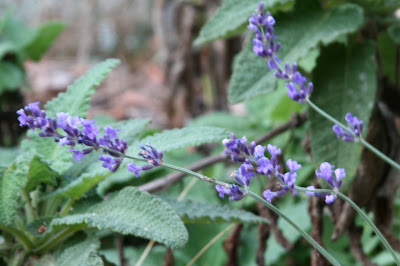 At the same time Correa (Australian fuchsia) is still offering much needed food for hummingbirds and pollinators. 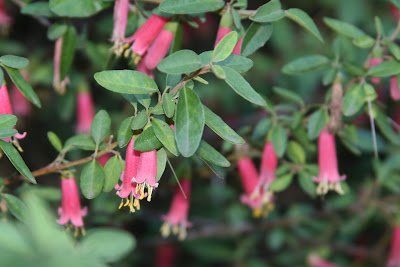 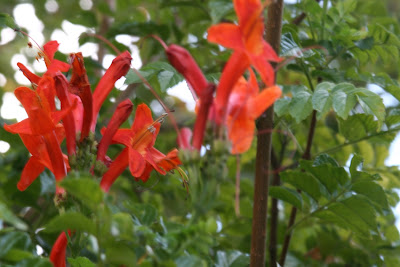 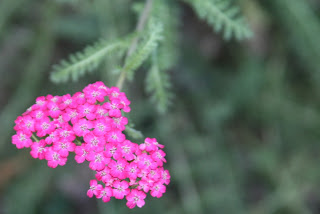 While the Rhododendron is almost ready to shed the last petal and leaf out. 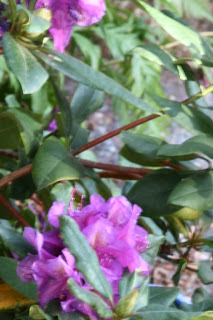 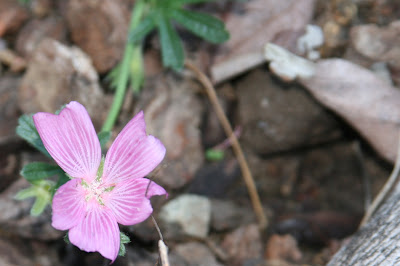 And, blooming since August, Epilobium is still going strong. 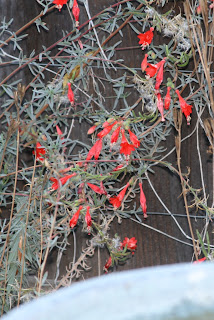 I have several cultivars, and the tall one that I believe to be 'Calistoga' only started blooming fairly late in the season and will probably keep going until December. 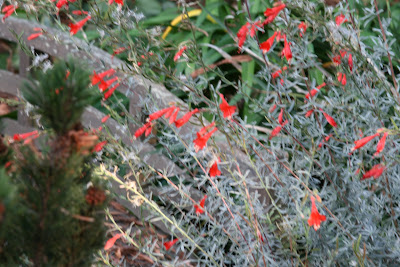 While the salmon-colored variety I received from a friend has finished blooming a while ago and is showing off sparkly seedheads. 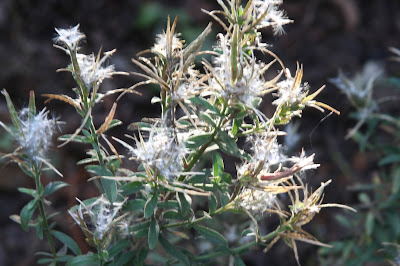 And even while I feel ready to not just show something old and something blue but something NEW, I know I'm very lucky to enjoy warm days and blossoms in the garden, to listen to the migrating birds and watch them in the bird bath, and to know the rains will come soon (and then I'll finally plant my bulbs...).

Meanwhile, I'm wishing you all a happy bloom day and I'll now head over to Carol our gracious hostess at May Dreams Gardens to see what else is blooming around the country -- and around the world.
Garden blogger's bloom day

Gail said…
Happy Bloom Day to you! Even though we are in very different climates, I think I get your eagerness to get through the transition time and onto the next phase. For you bulb planting for us~MUlching up the last of the leaves, putting away the hoses. I can garden on and off all winter as long as the ground isn't frozen, but want a small rest! Enjoy the day and those lovely fall blooms! gail
November 15, 2010 at 10:17 AM

Anonymous said…
A little to cold here for rosemary, but glad your bees are getting a good snack. Our bees are off to the warmth of the hives I guess, none in a week.
Happy Bloom Day.
November 15, 2010 at 11:30 AM

Lona said…
Wow, you have a lot of wonderful blooms yet in your garden. I had the same trouble this Fall planting plants and bulbs in our cement clay ground. It has been so dry here but tomorrow that may change with rain coming in.I am at the point now where I will believe it when I see it or hear it hitting the roof. LOL! I love your pink yarrow! Have a wonderful week!
November 15, 2010 at 12:53 PM

scottweberpdx said…
Lovely post...I've never seen an epilobium like that before...I planted a different variety (Epilobium angustifolium) this fall and can't wait for it next year!
November 15, 2010 at 4:12 PM

Curbstone Valley Farm said…
Ohhh! I didn't realize Checkerbloom might rebloom this late in the season. As for rosemary, I'm sure a lot of bees are grateful. I've been propagating some cuttings since late spring, which are now in 1 gal containers, with the intent of planting it to help with some bank erosion, and as a reliable bee-friendly bloom for late fall. Like your Epilobium, our Galvezias are still eeking out some gorgeous red blooms too, much to the hummer's delight. A lovely show for GBBD TM!
November 15, 2010 at 5:19 PM

Wally said…
Great pics. Love the yarrow and the mallow. So interesting to see correa growing on the other side of the world.
November 15, 2010 at 8:59 PM

Meredith said…
That Australian fuchsia is gorgeous. And I'm totally jealous that you still have hummingbirds. ;)

Carol said…
Lucky you and lucky hummers too. How lovely to have Rosemary growing outdoors. I have it in pots and must bring them in soon. Mine are not in bloom however. Lucky bees in your part of the world! ;>)
November 16, 2010 at 4:43 AM

Christine said…
Prepare yourself- it's supposed to rain all this weekend. Let the bulb planting... BEGIN! Thanks for the show- still so much going on in your garden.
November 16, 2010 at 8:59 AM

ryan said…
That does look like the same Cal fuchsia that I have. I get a little frustrated with them, but they do bloom well this time of year. I'm impressed at the variety of blooms you have. A very nice collection for a November bloom day.
November 17, 2010 at 5:54 PM