For the Native Plant Novice: When? 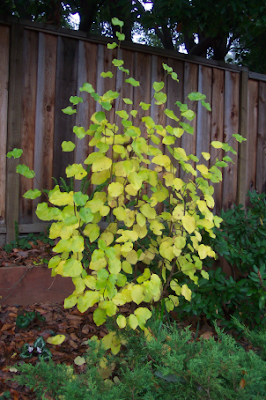 If memory serves, the actual question of the native plant novice on the Yahoo! group had to do with timing. I believe s/he had bought a few plants, and wasn't sure when to put them in the ground. Wait for the rains? Wait until after the worst of the frost? So, here are a few musings regarding the question of timing. My answers are based on my personal experience here in the Valley of the Heart's delight, and on information I got from books and from talking with people.

You might also be interested in the information about garden activities that Barbara at Wild Suburbia has in her sidebar. And you can buy the book Care and Maintenance of Southern California Native Plant Gardens from CNPS (rip-off alert: on Amazon, some sellers offer the book for over $100; do yourself a favor and buy it for $30.00 from CNPS). Much of the information applies to Northern California Gardens as well. The book is bilingual Spanish and English. 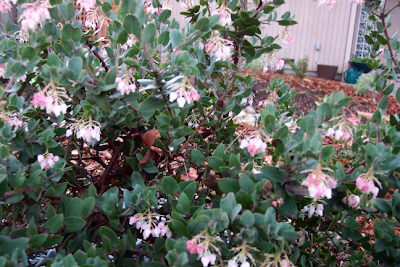 When to Plant CA Native Perennials and Shrubs. Most CA native perennials and shrubs are most likely to thrive if you plant them right before or during the rainy season. That is especially true for plants that grow in sunny locations. If the plant blooms in late winter or very early spring, like the Arctostaphylos pajaroensis above, I would err on the side of planting a little early (October/November). For all others, any time during the rains is great. I had the front garden planted in October, but the ground is so hard that time of year that I could not have done that by myself. I had the back garden planted in early January. It got quite cold, and I was worried, but the plants didn't mind. 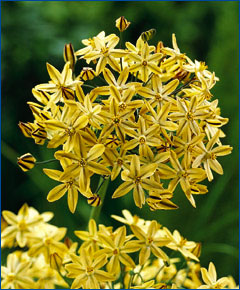 When to Plant CA Native Bulbs. Just today, I finally I put in half of the bulbs I bought. I'm a bit embarrassed to admit that they all came from Holland. I ordered from John Scheepers; 20 Brodia ixioides Starlight, two different native Allium and a native Fritillaria. I would have preferred to put them in a little sooner, but we only just had the first decent rain, and I was unable to get holes into the ground until now. Regardless, November or even December is fine for native bulbs, and it's a joy to see them explode into bloom in the spring. 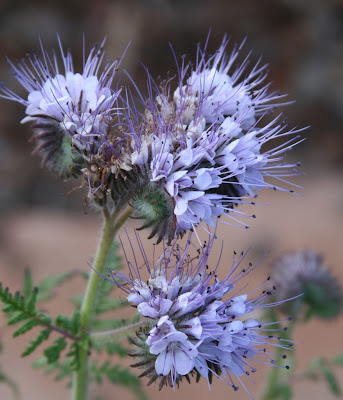 When to Sow CA Native Seeds. California offers an abundance of annuals, important for pollinators and other critters in the spring. Seeds are available, for example, from Larner Seeds and from the Theodore Payne Foundation in Southern California. Here's what Larner Seeds has to say about sowing annuals:

Traditional planting time is October and November, but wildflowers are adaptable to many different planting regimes. We sow as late as April on the coast. Seed sown in the spring will usually require some irrigation till the seeds have germinated and made early growth. Some afternoon shade is helpful. Here on the coast, we sow seed in four inch pots through the year for regular planting in the garden.

If you enjoyed the most recent post by Country Mouse, you'll see that she's a step ahead of me and has her 4 inch pots all ready.  I've been delayed by my battle with the bulb(s) but hope that I'll have a chance to put in a few seeds before the end of the year. 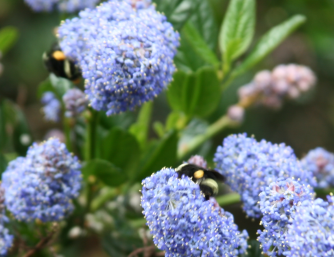 When to Prune. Pruning times are probably most confusing and somewhat counter-intuitive. Many perennials and shrubs are summer dormant, or at least semi-dormant, and it's best to prune them in summer. Ceanothus, for example, benefits from pruning in August or September. If you wait until October, you might be cutting off the buds, and might have few blooms indeed come spring. 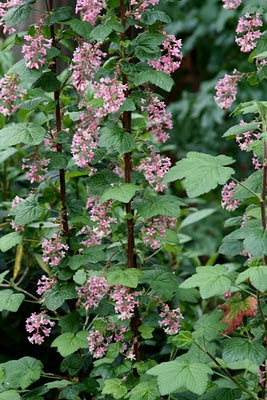 When to Enjoy Your CA Native Garden. It's starting to sound as if there is no rest for the weary CA gardener. Pruning in summer, sowing and planting in fall, transplanting and more pruning in winter. But actually, I find that for a more informal garden like mine, there's plenty of time when I do nothing for weeks on end. Instead, I take little forays into the garden, camera in hand. I try to capture the bees and birds, the raindrops on the spiderweb or the lizard basking in the sun. I'm thrilled to see the first native currants bloom in January, and happy about the last of the Epilobium (California fuchsia) in late November. There's a surprise in the garden every day!
Native Plant Novice

Susan said…
Wow you've got some pretty plants there but unfortunately I don't have the perverbial green thumb. I tried my luck with morning glories I just love those, but didn't do so well. Maybe next year AGAIN... wish me luck!
November 24, 2010 at 11:03 PM

Byddi - We didn't come here for the grass... said…
Thank you so much - This post is so informative and it sums up all the major questions I have about my new garden in a nice easy to read summary!
November 25, 2010 at 11:04 AM

Country Mouse said…
Another great resource for when to do things is hidden in the back of "Designing California Native Gardens" - Keator and Middlebrook. It's Glen Keator's annual calendar of activities in the native plant garden. It's Appendix 3, "A Calendar for Managing Native Gardens." Bullet lists for each season's garden activities, in less than two pages. A very handy reference!
November 26, 2010 at 7:29 AM

Curbstone Valley Farm said…
Well, that's a relief, I've been so ridiculously busy that I STILL have the bulk of my planting to do. If I get some done before Wednesday, at least it will still be November! So much catching up to do...and so much rain too, hope we get a few dry days next week!
November 27, 2010 at 12:42 PM

lostlandscape (James) said…
Nice roundup. If it weren't for the weeds that are just starting up it'd be possible to unwind in the California garden almost every weekend. But my favorite garden-enjoying season should start up in a couple of months.
November 28, 2010 at 6:58 PM

Christine said…
Wonderful! I tend to be pretty lax about timelines myself. I planted my garden in the heat of summer. Sure I lost a few, but patience and garden do not go together for me! What you say about Ceanothus applies to Manzanita and Garrya eliptica as well- check the tips of the branch before cutting or just accept that you'll have less blooms.
November 29, 2010 at 10:44 AM