So here's what happened. I went to the plant sale.

Posted by Country Mouse on October 11, 2010
So here's what happened. I volunteered with CNPS sale in the morning, and in the afternoon, I shopped around both the CNPS sale (nothing for me this time, surprisingly, except I did get one fern, Woodwardia fimbriata, for a pot on the deck) and the UC Santa Cruz Arboretum sale. 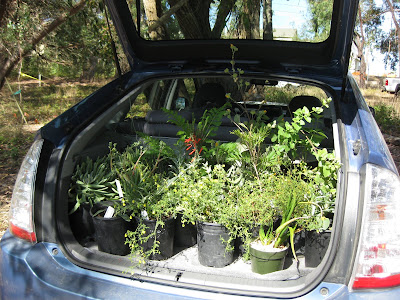 I'm also an arboretum member, but not active. I just send them a bit of money and enjoy free parking. They have lots of Mediterranean zone plants from Africa, New Zeeland, Australia, California, and - the Mediterranean.

I came home and began playing with putting things in order. Duncan gave his opinion freely. I wish he knew more than me about landscape design. I feel like I haven't progressed all that much since I first tried laying out this garden six years or so ago now. I'm proceeding more by logic and faith in nature, than by vision. 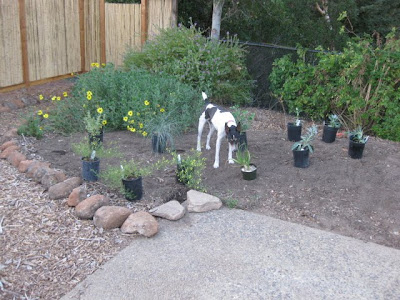 Honeybells in the front corner there, to spill over and soften the edges (there is a leaky pipe to keep them moist!), scarlet bugler up the hill - which has to be amended with gravel to give better drainage and really the soil there is too rich for this plant but I'm going to cross my fingers. Festuca californica to give some fountain form for contrast. A pretty and low growing rockrose just in front of the Encelia californica.

Here's how I'm thinking of laying out the other side of the little path to the woodland. 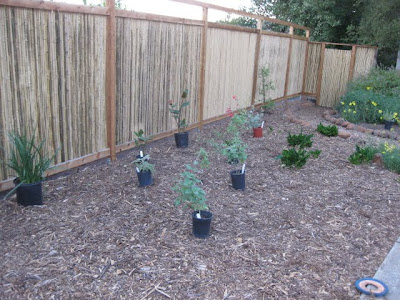 Back row, left to right: Kangaroo paws, tall, exotic, and red: Indian ginger, tall exotic and apricot with interesting foliage, and palmer's abutilon - bushy and yellow/gray green foliage - to pick up on the other yellow on the other side of the path.

Then in front - the three red flowering salvias and the yellow flowering Jerusalem sage. Contrast in color and texture but I'm not sure how to place them exactly.

Pre-existing white Calla Lilies will just have to stay as I cannot cannot cannot get them to die die die! I'll just snip the ones I don't want and try to keep them to a reasonable level of garden participation.

I need some low things to spill over the concrete edge still. Looking for ideas here...

More about the plants
At the sale, I did have clear parameters at least, and I snagged some expert sales people to help me find things that fit them:

And not so clear parameters: blooms at different times. I just winged it on that.

Winter-Spring Bloom - Native
?? Didn't get any

Winter-Spring Bloom - Non-Native
Spring-Summer Bloom - Native
The false lupine is one that could be locally native but I haven't seen it. I'm not sure where to put the 3 Winifred Gilman - it has such a lovely scent, it needs to go where people walk past often. Maybe just north of the herb garden? 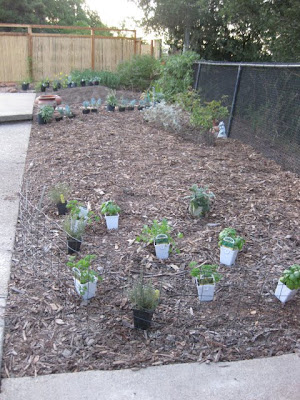 I put the dudleya and the already-purchased blue-green non-native succulent (seen in the distance above) , alongside the rock edging of the path to the hose spigot. The rock also deals with a drop in elevation where the pool patio step-down is, so the dudleya will have a slight slope there, which they like. The dudleya doesn't look like the pictures of D. cymosa at all - so I think it was mislabeled.

I also think I'll put the Erica cerinthoides near the hose bib to maybe give another focus to the end of the path than a hose bib!

In the foreground, above a little herb garden I'm getting going. I'll put the low fence around it more neatly, to keep Duncan from charging through. I have basil, thyme, sage, parsley, so far. I thought the sage could mound up in the middle - it gets big - and has pretty blooms. 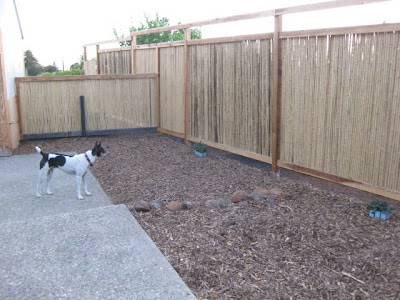 Above: just a couple six packs of hollyhocks to brighten up the fence - but not sure at all what else to put here as yet. I don't have the vision thing going in this area.

I'm hoping to propagate our native fuschias for next year. I'd like a few more ideas - I know the GWN group had a lot of lists for summer and fall bloomers.

I did make one large mistake, in buying Grevillea "Robyn Gordon", a 6X9 red blooming shrub from Queensland. Too darned big. I'll try it on the south east facing wall of Dad's cottage, to shade the cottage, maybe - or offer it to others.

Other ideas - things I have already propagated or or can propagate Elderberry
Iris - Maybe when some taller things get going there would be a little afternoon shade for them?
Nassellas (bunch grasses)
Solanum umbellatum, (blue witch )
Annual lupines
Other lupines - have two.
Soap plant
Deer grass
Golden yarrow
Creeping snowberry
Coyote mint
Hairy honeysuckle
Coffeeberry
Manzanita
Holodiscus discolor in shade of other plants? – Have one plant sticking out that’s rather tall? But not too wide.

Non-local native: I would like to try Woolly Blue Curls. And if we need more height, matilija poppy on the fence would look really good too.

Well - progress of a sort. I'm sure it will be a learning experience - again!

Christine said…
So exciting! I notice you don't have any grasses on your list- the thin blades really help create a varying texture. Blue fescue could also be a great ground cover in the front of the bed.
Also, have you considered making mounds of soil to create variation in height? I love the look of mini-hills studded with those moss rocks you have lining one of the beds.
It takes more water, but maybe consider Mondardella 'Marion Sampson'- red tubular flowers!
October 12, 2010 at 12:28 PM

Country Mouse said…
Oh, that Monardella sounds really good - "This species forms low mats with dark green, shiny leaves. In late spring and summer its heads of large scarlet, tubular flowers nestle among the leaves." (suncrest nurseries). Full sun, occasional to moderate water - perfecto!
I have one sort of mound you can't see well, but I'm not sure about other mounds - As we have very little flat area really, it's sort of nice to have it stay flat! I do plan to put more of those rocks on the one mound where I want the scarlet bugler, along with a bunch of gravel to mix in. For grass, I'm hoping I can use the local native nassellas for grasses. But - clueless - I'm not sure about the warm season and cool season grasses - guess would want some of each. But also, can't be too messy - beside a pool. That was another background requirement. I haven't had the best luck with blue fescue in the past, but maybe I didn't treat it right!
October 12, 2010 at 1:38 PM

Diana Studer said…
Here is a link for that Erica. It says variable habitat - coastal plains to mountaintops! http://www.plantzafrica.com/plantefg/ericacerinth.htm
October 12, 2010 at 1:41 PM

Town Mouse said…
Very cool! Of course I'll have to come over to really get the idea, but I love the basics. Those kangaroo paws will be great!
October 13, 2010 at 7:19 AM

susan morrison said…
Fescues are ALWAYS a problem for me. I've stopped adding them to gardens. If you're ok with more non-natives, a favorite evergreen grass of mine is Lomandra longifolia 'Breeze' - I think it's Australian. Be careful of the Winifred Gilman as it often gets to be 4 - 5'.

If it's not too ordinary a choice, consider a low-growing gaillardia like Goblin for the front of the bed. Low to moderate water (but generally doesn't mind more if there's some drainage), it fits your criteria for bright colors, will mound (not spill) over the concrete and the orange-red centers will pick up the red from the Kangaroo Paw in the back of the bed.
October 13, 2010 at 8:38 AM

Country Mouse said…
That Gaillardia sounds very jolly for front of border. I don't think it's invasive - not on cal-ipc anyway. I'm afraid of any non-native grasses escaping but maybe that's not rational. It is a pretty grass - but I need to think more. I am no longer so sure the bunch grasses will work in full sun - when I look around at where they are on the property, they generally have some shade. Thanks for all the encouragement - now if it would just start raining. I've taken most of the pots out of the sun for the duration of this heatwave we're having.
October 13, 2010 at 9:37 AM

Anonymous said…
Very well laid out plan fore of a lovely fence. That is a lot of work, but I am sure it will be fun. I love new plants and love to see them in a few years even more.
October 14, 2010 at 5:57 PM