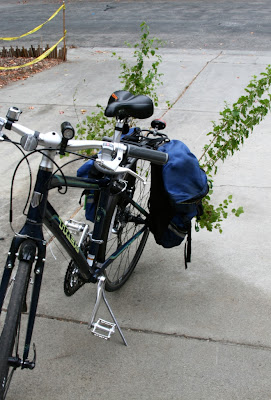 I recently listened to a radio program about human-centered design. One of the speakers mentioned one of the important factors of good design is embracing constraints. The way he said that sounded as if everybody knew that having constraints fuels creativity and gives focus in to the design process. And I thought:"Well, how interesting. Maybe it was smart of me to take my bike to the plant sale, knowing full well that I had pretty much enough plants. " (Though I did end up with 3 1-gallon plants and 2 4-inch pot. 2 of the 1-gallon plants carpooled with a friend, and I picked them up from her house by bike. )

But I digress. Because I don't really want to look a simple truth in the eye. Like all gardeners, I try plants in locations where they'll most likely not be so happy. Zone pushing, it is commonly known. And then things don't work out so great. 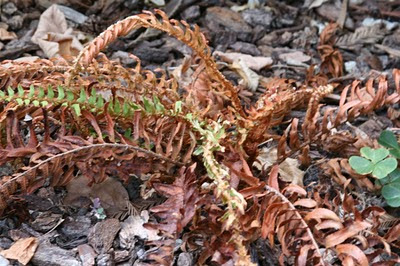 Yes, this fern suffered partly because the irrigation was off for 3 weeks this summer. But I also think it might be happier in a different spot. Right now, it gets bright shade all day, and then 1-2 hours of late afternoon sun. Not a great combination, but I think some Heuchera or even monkey flowers might be happier.

Thinking about how to embrace constraints, I started working on the design of the small area near the benches where two non-native fuchsias have pretty much perished in the 3-week irrigation failure drought this summer. Here's what we have right now:

Moving from left to right, we start with an indestructible non-native fern, followed by a Clivia miniata (large strappy green leaves, orange blossoms in early spring (note to self: make photo when in bloom next year!) 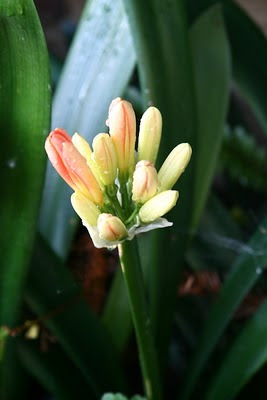 To the left of that, the first of the two very overgrown Heuchera (beautiful rose/almost white blossoms in spring). The photo below is Heuchera maxima, and the plants I have in that bed are Heuchera 'Wendy' and Heuchera 'Canyon Delight', but you get the idea. 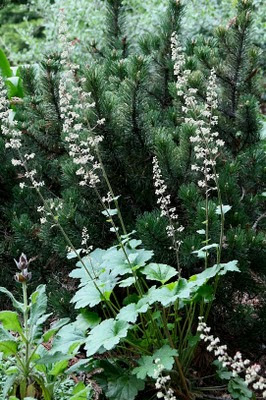 To the left of that, the two almost dearly departed, very woody fuchsias, followed by more Heuchera and Clivia. Behind the fuchsias, I also planted some native Iris, but they have not exactly taken off, we'll see whether they make it.

What were my constraints? I wanted plants that needed less water than the fuchsias and that tolerated shade (and an hour or so of sun, shining through the redwoods). I wanted something blooming for a month or more. I wanted wildlife friendly plants. Here's my plan:

From the left, we see that the fern has been reigned in a bit. In front, the first of three Mimulus puniceus (Southern red monkey flower). I have a M. puniceus in the redwood habitat, and it's impressed me with its long bloom time and shade tolerance. 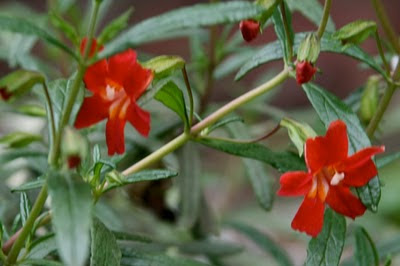 Very fortunately, Annie's Annuals had them on sale last week so I mail-ordered three. They arrived 2 days later, beautiful large plants that I immediately transplanted from their 4-inch pots to 1 gallon pots. They are now waiting for rain, I'd need a pickax to get holes into the clay right now.

The Heuchera have been thinned, and I'll find other locations for the babies, which I'm propagating. In place of the Fuchsia, I've planned on 2 M. puniceus and a Rhamnus crocea ilicifolia (Redberry; Photo from Las Pillitas). 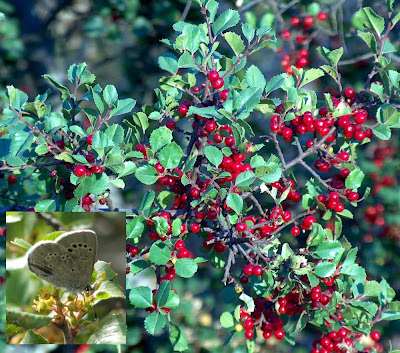 This plant might be an unusual choice, and it is indeed an accident. My garden designer had asked me whether I'd like for her to get one for me, she was visiting a nursery where they had a few. "It will be great in the redwood habitat," she said "Arching branches to finally replace the cotoneaster you took out." I quickly looked the plant up and liked the pictures. Shiny leaves, red berries, looked like a nice fit. Then the plant arrived, and I found that the leaves are maybe 1/8 of an inch. Tiny. And the berries will be even tinier. Furthermore, this plant was not arching, and the nursery had warned that it grows very very slowly. I then decided that I'd be happier to have that plant close by, near the sitting area, and plant something else that really is arching and faster growing in the redwood habitat.

Right now, I'm thinking of Ribes viburnifolium (evergreen current) or Sympocarpus mollis (trailing snowberry). And who knows, I might come up with another plant or two that meets my constraints. But I'm hoping that I'm learning my lesson and find places where the plants will be happy and reward me with blossoms and berries.
Design

Good article! Yesterday I walked to the garden center from Meg's school, it is about the distance of walking to the end of a Walmart parking lot. Bought seeds and a 3 gallon camellia that was 5 ft tall. I knew that was all I could carry and by the time I got back to the school I was more than ready to set the plant down.
October 21, 2010 at 3:35 AM

Christine said…
What dedication! Or is it addiction? I've never heard of the phrase "zone pushing", but I'm certainly a culprit. We can actually get away with quite a lot in our temperate climate, and it gives us an excuse to just buy more plants and move them around when it doesn't work out!
Good luck on the new bed- looks great so far! What about a Philadelphus or a wild rose?
October 21, 2010 at 8:47 AM

Pam's English Garden said…
Dear Town Mouse, I like the concept of 'embracing constraints'. I'm not terribly good at it though. Your new design is well thought out. x
October 21, 2010 at 6:59 PM

Town Mouse said…
Well, Christine, it's actually a fairly small space, maybe a foot wide, so Philadelphus is too big. And I'm nervous about wild rose being a spreader.

Curbstone Valley Farm said…
I used to be a zone pusher...but I remember one winter when our temps dropped to 16F, and the carnage in some of the gardens was horrendous. I try hard not to zone push much anymore...although, occasionally I can't help myself. I think I really need to bicycle to my next plant sale though! :P
October 22, 2010 at 5:49 PM

ryan said…
I agree that it's hard to do a design without any constraints. I only planted rhamnus ilicifolia once. It gets very little water and hasn't really grown. Tough plant, though. I guess it will be really nice someday.
October 23, 2010 at 1:12 PM

lostlandscape (James) said…
Zone pushing? Guilty! Both in some genuine tropicals and plants (like apricot) that really need more cold than I can offer. I saw some Catalina perfume recently and they looked amazingly green at a time of year when that color can be in short supply.

camissonia (Arleen) said…
I'm a confessed zone pusher, mostly because I've stubbornly and repeatedly tried to grow several montane species in my lowland garden without success (i.e., Iris missouriensis, Penstemon newberryi, Mimulus lewisii, Gentiana newberryi). It's not so much where I put them as the fact that they hate our dry summer heat and lack of snow in the winter. Sigh. Looking forward to seeing how your new design progresses.
October 25, 2010 at 10:55 PM