Mystery Succulent (Can You Help?) 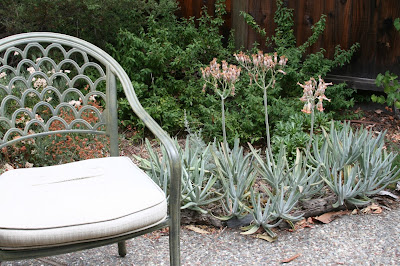 A few years ago, while on a shopping expedition to Native Revival (one of my favorite nurseries), I picked up two 4-inch pots with an attractive, fleshy, blue-green succulent. When I asked a person on staff what it was, she said:"Oh, that's not a native. We stock it because people want them." And no, she did not know what it was. Well, it was on sale and so I took it home.

At first I thought it was a kind of Senecio, but then the blossoms appeared, and I realized I had no idea what I had. 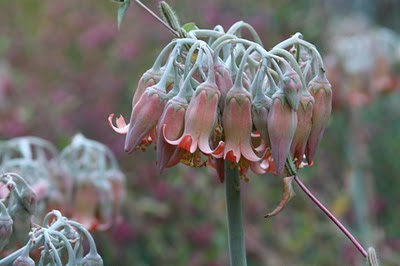 But whatever it is, it is quite happy in my garden! Each winter, the plants seem to double in size. They are easily transplanted, and I've tucked them into containers and put them in the sunny, dry, front garden. While other succulents almost don't make it through the dry summers or succumb to the light frost we sometimes get, this plant seems to love it here.

So, does anybody know? My mystery sedum taller than the blueish Senecio (the first photo has it next to a chair for comparison). Flowers in late spring. Reblooms. Tolerates light frost. Sadly nameless for several years now... 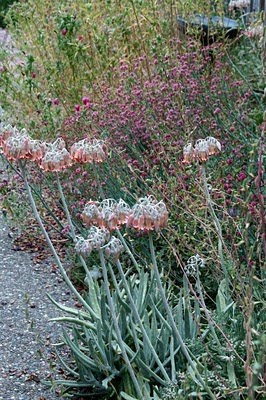 Diana Studer said…
http://www.plantzafrica.com/plantcd/cotylebarbey.htm
How about this? Sadly their photos for this plant are not great. We have Cotyledon orbiculata (pig's ears for obvious reasons) and the flowers are very similar.
http://elephantseyegarden.blogspot.com/2010/02/will-i-still-love-this-garden-when-i-am.html
September 18, 2010 at 12:43 PM

Town Mouse said…
Mmmm. I found a better picture of the same plant here, and the leaves are wrong -- green and roundish, not blue-gray and narrow.

Diana Studer said…
orbiculata comes in five leaf varieties. From green to grey, and even split into reindeer horns. Yours is probably a horticutural variety?
September 19, 2010 at 5:11 AM

Diana Studer said…
Oh ouch. Your Stellenbosch link is a picture of orbiculata.
September 19, 2010 at 5:12 AM

Diana Studer said…
This one ?
http://operationwildflower.org.za/index.php?option=com_joomgallery&func=detail&id=526&Itemid=8
September 19, 2010 at 5:21 AM

Dee @ Red Dirt Ramblings said…
Whatever it is, it is beautiful. Those handing pendulum blooms are outstanding as is the blue color.~~Dee
September 20, 2010 at 12:07 PM

Noelle Johnson said…
I just love the flowers of this pretty plant. Unfortunately, pouring over my plant books....I am not even close to identifying it. Thankfully, you don't need to know what it is to enjoy it :-)
September 20, 2010 at 4:34 PM

Town Mouse said…
Well, I completely agree with Ms. Elephant's Eye, the flowers look like those of Cotyledon orbiculata. But those leaves still bother me a bit -- maybe it will have to remain a mystery for now. I'm thinking of contacting the local succulent society.
September 20, 2010 at 7:18 PM

xoxoxo said…
I was reading a book last night that described Agave... and thought of this post...
there are 300 varieties..
Agave palmeri (Palmer agave) looks close
http://www.mswn.com/MSWNamazingagaves.htm

lostlandscape (James) said…
I'm not very good with the Crassulacea. If I saw it out in the wilds without flowers I'd immediately say "Dudleya," though I'd be wrong.
September 21, 2010 at 10:12 PM

deenk said…
Definitely Cotyledon orbiculata. As Elephant Eyes commented it has much more variety in leaf shape than almost any other species of succulent.
June 24, 2011 at 1:50 PM