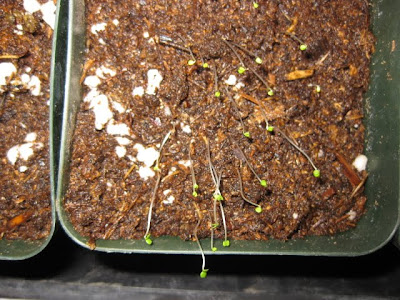 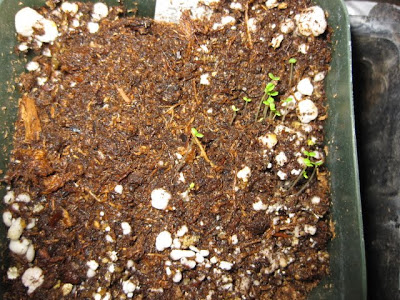 Oh wow! Seeds sprouting already! I sowed these on Sunday and Thursday I noticed the Clarkias are already germinating! Some look like they should have been opened to the light a couple days ago. I have now followed Marjorie Schmidt's advice and raised the glass (well, polycarbonate) covering a few inches and removed the newspaper, just for those that are sprouting. The rest have yet to show.

I have to confess that when I planted all these different seeds on Sunday I misremembered the guidelines for annuals. You're supposed to sow them in late October! But we'll see what happens. I did save some seeds for a later sowing, after I discovered my mistake. These are local wild clarkias and I am VERY excited!

I'm used to these things being Very Difficult - so maybe I make things difficult for myself. For example, I spent a day pounding on ceanothus nutlets to get the seeds out for stratification and hopefully germination - Curbstone Valley Farm commented that their ceanothus seeds pop all over their deck! I should just have waited till late August.

And then - we had such a hot couple of days, 105 in the shade, though we're back to cool drizzly fog in the mornings and I love it. I think the burst of heat made everything pop. Including the madrone bark! 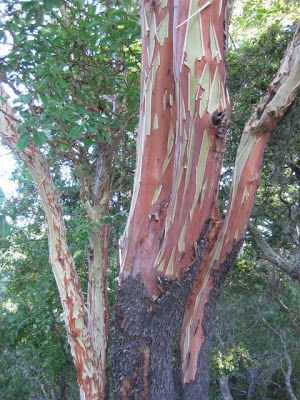 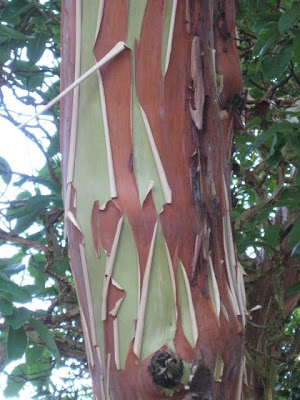 Sure enough - the Ceanothus thyrsiflorus has cast its seeds to the ground in myriads of shiny black balls. 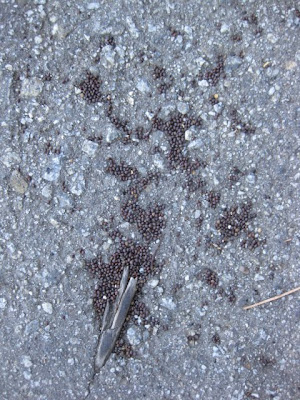 I collected a nice handful from the roadside to stratify along with the others, and we'll see if there's a difference in the results. 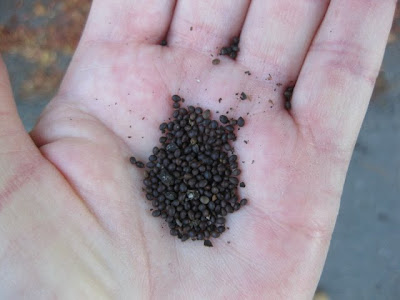 Christine said…
How exciting! I love how the Clarkia decided to give you a few words of encouragement.
And the Madrone... When I look at a Madrone, I get the same hushed feeling of standing in an ancient cathedral. Such an awe-inspiring tree!
I just tried sowing Baby Blue Eyes for a late Fall bloom (I'm hoping). Have you tried doing that?
August 27, 2010 at 9:43 AM

Noelle Johnson said…
Oh, I am just smiling reading your post because I tend to jump the gun and sow early as well. I have all my supplies ready to sow annual seeds. I cannot wait to see your Clarksia in bloom :-)
August 27, 2010 at 9:55 AM

Curbstone Valley Farm said…
Congrats on the Clarkias! I don't think we have any wild ones here. I'm relieved that I really do have a couple of extra months before I have to sow my native annuals though :P I'm glad you've found some 'popped' Ceanothus seeds, if you didn't, I was going to offer to scrape up some extras here, my deck is a mess with them right now, but the chipmunks are happy! It was quite interesting hearing the seed pods explode when the sun hit them in the morning. I will be interested though to see if your stratified Ceanothus seeds you've already prepped germinate better. I'm not sure how difficult it will be to get them to sprout. BTW, I love your madrone. I have one exfoliating all over the road. I love it though, the bark is so pretty.
August 27, 2010 at 5:22 PM

Monica the Garden Faerie said…
LOL, I told you Clarkia were easy. ;-) I also love to experiment. Remember, if native plants can sow themselves, so can you. You just have to emulate their natural timing and conditions, as fun as it might otherwise be to pound on seeds! :)
August 28, 2010 at 7:23 AM

Country Mouse said…
Christine - We are lucky to have several fine madrones - and a few dead ones who are also fine - on our property and around our neighborhood. I haven't tried sowing any annuals so far. I've been working on the shrubs this year it seems. A lot of learning - it'll take a few years for it all to settle in.
Noelle- glad to hear from a fellow impatient gardener!

Carol - thanks for your good wishes! Ya that heat was too much for me for sure. Actually I did severely damage one poor elderberry in a 2 gal pot - why did I not go out and check on it and put it in the shade! ARGH! I think it will survive but it won't be so completely pretty and perfect. Oh well - join the rest of us, little elderberry.

CVF - I'll share these clarkias with you if you want. I can spare a little bit of seed and if they themselves thrive I'll have lots of seed. They are arguably from the same watershed, as Branciforte drains into San Lorenzo river. Though I think that's not enough to reckon true endemic status. Still, pretty gosh darned close. I am already empire building with these little babies - how can I create a big bed for harvesting seeds to share with neighbors!

Monica - yes, I have little faith I guess but with more experience I hope more confidence will come - I had to reread your comment a couple times thinking you were telling me to go sow myself :-D hahaha.

Byddi - We didn't come here for the grass... said…
Whew - you gave me a start. When I saw you'd planted Clarkia I panicked thinking ...do I need to be doing that now to - on top of everything else!

I'm aiming for planting in October. Just pouring over catalogs at the moment trying to make some choices!
August 28, 2010 at 9:14 AM

Barbara said…
I admit I had to look up what clarkias are. I don't think they're commonly grown here in Germany at least. Or is it the same as evening primrose? OK, my ignorance. In fact, I don't think we have madrones over here either, so your post was interesting!
Thanks for your comment on my blog. In fact, a friend and I hiked a German/French section of the Way of St. James (Jakobsweg) last year from the cathedral in Speyer, through Saarbrücken, and on to the cathedral in Metz in Lorraine, France. It was fantastic. I haven't dared try the Spanish Way, since it's reportedly now so crowded.
August 28, 2010 at 11:53 AM

Anonymous said…
This should be an interesting experiment for sure. What will your clarkia do? Will they think it's late in the year and rush to flower on tiny plants? Will they get a massive head start on next year's season and give you clarkias the size of sequoias? It's interesting to read that they germinate so easily. Even without pre-treatment, my limited experience has led me to conclude that many plants still wait for the right, cool temperatures of autumn.
September 3, 2010 at 10:00 PM