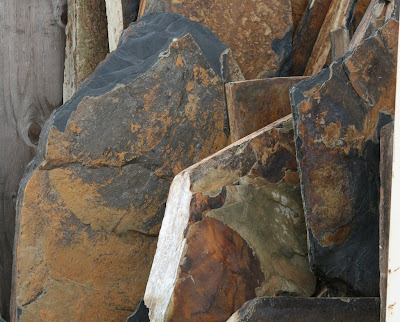 Dear reader, we left the story yesterday as Town Mouse had fallen in love with the Mariposa flagstone, and was trying to schedule a time for having the patio built. First, Town Mouse and Ryan agreed on a Wednesday, a few weeks before Garden Tour day. Then the forecast for that Wednesday was for serious rain, so they managed to reschedule for Tuesday. Ryan had cautioned Town Mouse that slate was going to be tricky for a dry stone patio, but was willing to give it a try.

They met at the stoneyard, and Ryan tried to lay out the patio to see whether it could be done. The goal was to have very few or no cuts, and an oval, fairly symmetrical shape. It was like doing a puzzle, except you didn't know whether all the pieces were in the box. Ryan moved a lot of stone, while Town Mouse watched, made a suggestion every once in a while, and watch some more. It rained. It stopped raining. An hour passed. Then another hour. But slowly, the patio was taking shape. It was really quite amazing. Did the stones really just fit together like that? Were they meant to be a circular patio? So many possible angles, and yet sometimes, the angle just fit. 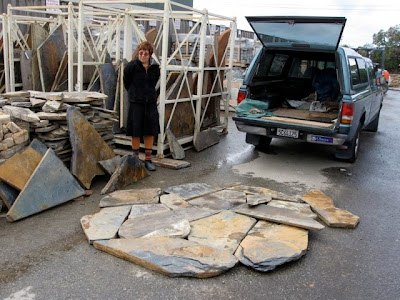 Town Mouse made a few photos, and then they attempted to put the stones in the truck in an order that would later make sense (and if it didn't make sense, there would be the photos). 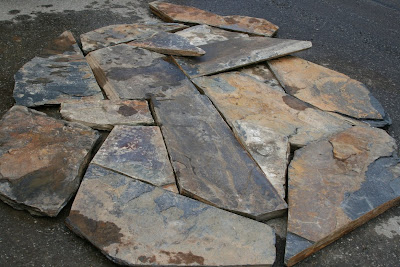 Town Mouse started feeling a little tired by then, and was very glad indeed she did not have to lay the patio herself. And Ryan had wisely left a worker to prepare a hole in the area that had been marked for the patio, and to help with the laying of stone. When Town Mouse and Ryan arrived, the hole had been prepared. 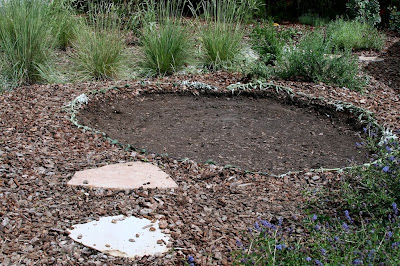 Then came the interesting task of trying to reconstruct the layout from before. It was tricky, and Town Mouse actually had to print her two photos to help with the process. Then Town Mouse set to work finding spots in the garden to put the earth that had come out of the hole. It was a challenge, but slowly the mountain of earth got smaller. Every once in a while, Town Mouse glanced over and watched the patio take shape. It was fun to watch, and it was an amazing amount of work. Five hours later, Ryan had to leave, and declared the job done. 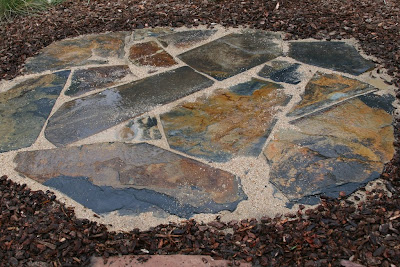 And it was a thing of beauty! All that was left to do was to sprinkle a little more DG between the cracks as the DG settled, and to water the patio a bit once or twice a week. Easy! And the next weekend, even though it wasn't sunny, Town Mouse brought out the furniture. 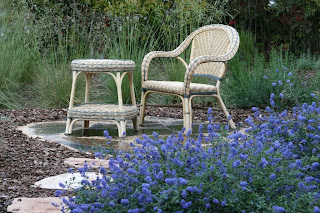 Perfect! And if we move the table a bit, there's even room for another chair -- if Mr. Mouse changes his mind and wants to sit in the sun as well. 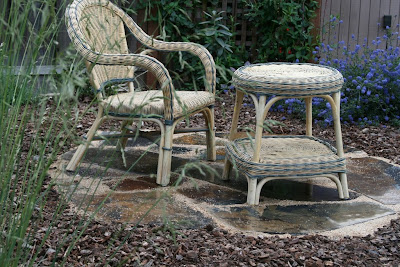 Anonymous said…
Oh my goodness, that truly is a thing of beauty! Ryan is a master puzzle worker, and the chair and table look very inviting. The color on the stone is perfect as well. The blue flowers add to the atmosphere. And in closing, let it never be said that I do not appreciate a cute pair of socks! :-)
Frances
April 11, 2010 at 3:47 AM

Country Mouse said…
I'm also glad you picked the mariposa - beautiful swirl of earthy colors you'll never get tired of. I like when you said: "it was like doing a puzzle, except you didn't know whether all the pieces were in the box" - very apt! It's gorgeous indeed. What surprises me is how large a space was left. between some of the stones. I think I'll have to get some decomposed granite myself. When I laid the front path I used builder's sand and it hasn't been that great. I'd be curious to know how much prep went into the ground before laying the stone on top. Is the DG just between cracks or is it a few inches underneath too as a foundation, or is there builder's sand under, or just flattened dirt?
April 11, 2010 at 6:38 AM

Christine said…
How exciting! What a perfect place for an Arnold Palmer in the summertime! Good job, Ryan and Town Mouse!
April 11, 2010 at 8:36 AM

Pam/Digging said…
Stone that is local, or nearly so, always looks best in a garden, especially a natural-style garden. Your stone is lovely, and that little sitting area is so inviting. What a great present for yourself.
April 11, 2010 at 8:38 AM

Curbstone Valley Farm said…
Perfect choice, it's beautiful! I absolutely love the color of that stone. How thoughtful that there's still room for Mr. Mouse's chair.
April 11, 2010 at 8:39 AM

ryan said…
The patio looks very small and cute with the table and chairs. Great line about not knowing if all the pieces were in the box. That's the first time I've ever done it that way, laying the stones out beforehand. I think you were more helpful at the stoneyard than you suggest. Maybe you'll want to help me with the June patio I have scheduled.
I think the joints mostly look wide from the excess DG to be swept away and the low point on the stones in the front. There's about an inch of DG under the stone, and the soil beneath it slopes slightly towards the dry creek bed. For larger patios I use three inches of drain rock and another inch or two of DG, but I think it would have been overkill for this one. I haven't liked builder's sand when I've worked with it.
Thanks for the great tale and for being a great client.
April 11, 2010 at 3:35 PM

Concrete Jungle said…
Wow the finished product looks really amazing. Congrats to all. I know you will really enjoy that sunny get away :)
April 11, 2010 at 9:20 PM

Chandramouli S said…
It came out really great, Country Mouse! I love the color of the stones. I hope you add some beautiful trees/plants around to give you shade and a view when you settle down there for a morning/evening tea/coffee. I'm sure Mr. Mouse would be attracted towards it and get another chair for himself.
Ryan did an amazing job - if you can, let him know that :)
April 12, 2010 at 2:59 AM

Kate/High Altitude Gardening said…
Beautiful! My favorite restaurant, here in my little town, is called the Mariposa. I never knew what it meant but that stone is really pretty. What a nice outdoor living space! :)
April 12, 2010 at 9:38 AM

Town Mouse said…
Ah, well, mariposa actually means butterfly. Then they named a California county and after that (I think) the flagstone.

Barbara E said…
Your front yard shown in the first installment of "Christmas in April" - leaves and wooden fence - looks just like my backyard. I enjoyed reading about this little project and wish I could borrow the wicker chair with a cup of tea and a book. Sitting in the front yard is so nice!
April 14, 2010 at 6:02 PM 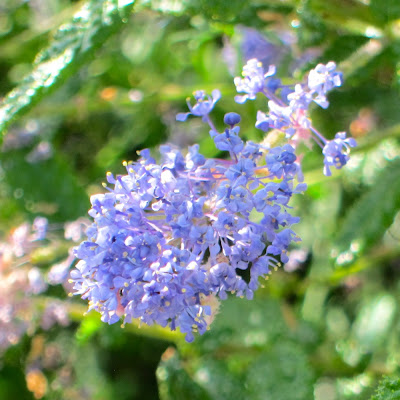