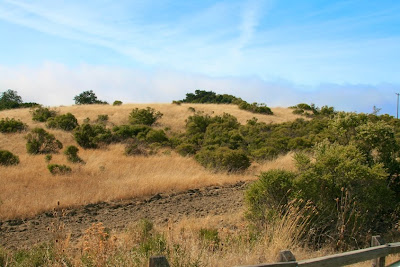 The weekend before the big storm, Mr. Mouse and I went for a walk at Montebello Open Space Preserve. The photos from that hike are good examples for typical fall coloring in California, so I'll submit that post to the Fall Color Project at The Home Garden.

The picture above is a typical golden California landscape of the dry season. Few people know that the grasses were all brought in by the first settlers, either intentionally or accidentally. Because these European annual grasses cannot survive a California summer, they die and turn brown (or golden), only to resprout from seed the next year. See the California Native Grassland Association form much more on that topic -- or just enjoy the beauty of the golden grasses with the dusty green of coyote brush in the foreground and darker green of evergreen oaks in the background. 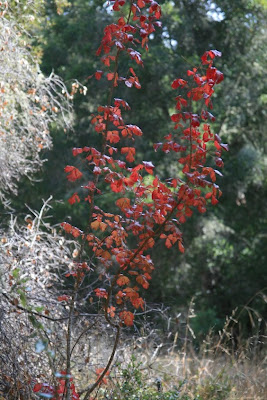 Our planned hike was the Steven's Creek Nature Trail, and soon after we'd entered the forest we saw the first signs of fall color. We knew it had to be Poison Oak, Toxidendron diversilobum, so we kept our distance. But the colors really were beautiful.

I've heard someone say there's a perfect California plant that can be trained as a vine or a bush, has berries for the birds, and beautiful fall color -- yes, that's Poison Oak. 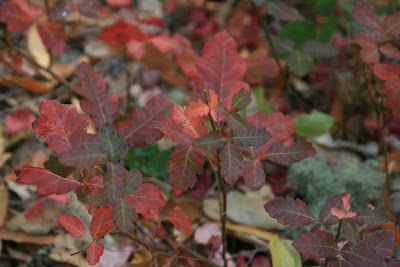 But I so enjoyed the coloring, I had to take another photo of some yellow leaves. 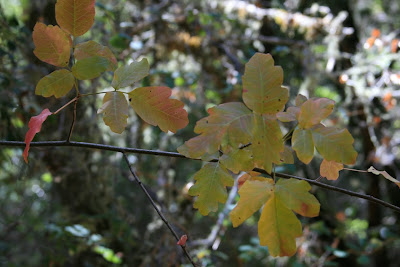 I admit that this is not a very impressive fall color display, but it was such an enjoyable hike. After a while, we got to the creek, and were excited to find it was still running. A very good sign, we hope, of full reservoirs this year. 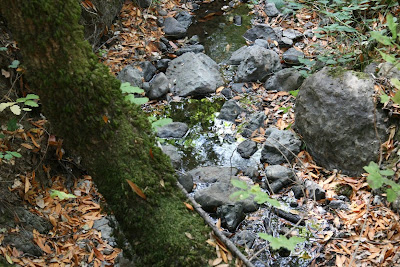 Further on, a fungus offered an unexpected splash of color. 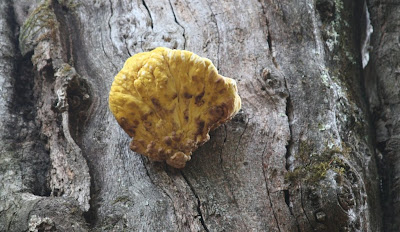 And finally, most glorious of them all, California Big Leaf Maple (Acer macrophyllum). 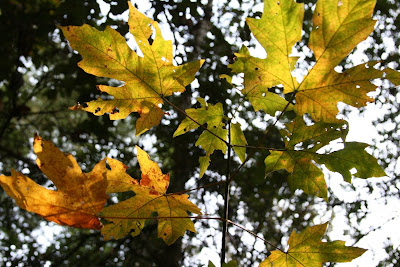 Yes, I know, the displays are more spectacular on the east coast. And we actually have a lot of street trees in the Bay Area that show stunning displays of orange and red against the dark blue October sky. But I cherish the special colors the native plants show. The seem to be saying to me: "No matter what people say, there are seasons in Norther California. We're going to sleep now, and we'll green up again when spring comes with the glorious display of wildflowers."

lostlandscape (James) said…
Okay, by now you probably know poison oak is one of my favorite plants. Your photos really show it off nicely. And even though the poison oak and the maples are going to sleep, it's the season when a lot else is waking up with the arrival of cooler weather and the rains--definitely something the people living in the land of autumn leaves will never get to experience. Definitely a fair tradeoff.
October 19, 2009 at 9:32 PM

Randy Emmitt said…
I learn new things everyday. California has fall, guess it has to happen. The best colors we have right now are the sumacs. I miss the sugar maple trees to our north which blaze in oranges and magentas.
October 20, 2009 at 4:14 AM

Sarah Laurence said…
I don't usually think of California for fall color but these photos are lovely. I love the subtle shades. Thanks for taking us on your hike.
October 25, 2009 at 4:58 AM