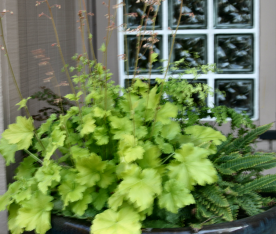 I hope you've all read the A Grand Wildflower Day Out post in which Country Mouse describes our amazing adventures on I-140 in the Sierra foothills. While Country Mouse would have never endevored such a reckless undertaking on a work day (she has a few days off), I didn't stop to think twice, and I'm now atoning for my recklessness. This is relative, since I'm self employed, nevertheless, my post celebrating Garden Bloggers Bloom Day, by invitation from Carol of May Dream Gardens, is late because I've had to work.
But let's quick take a turn before it gets completely dark.

Above, on the doorstep, is Heuchera 'limelight', in a pot with a Western Maidenhair fern (Adiantum aleuticum) and a Deer fern (Blechnum spicant). 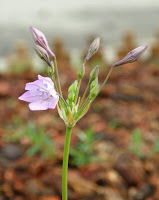 Also in the front garden we have a Triteleia laxa, a native bulb which has bloomed for at least a month (not to self: get more next fall). I'm stealing this great photo from a Country Mouse post dated March 25.

In the side strip next to the driveway we have three Shasta Sulfur buckwheat (Eriogonum umbellatum 'Shasta Sulphur'). I love this small buckwheat, the flowers turn from a sulfur color to a rich yellow and then fade over orange to brown. Quite a show, and it attracts butterflies! I had trouble with this plant until I realized it was missing the August thunderstorms that it gets in the Sierras. Now I water it a few times in late summer and fall and have better luck. 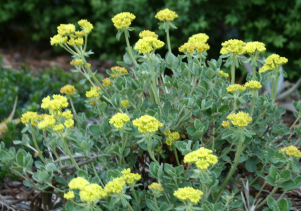 Ceanothus 'Tilden Park' is that rare ceanothus that tolerates some shade. I've planted three in the front garden, and the first has already started to bloom while my other ceanothus in the back are only just starting. Still, for the first time, I have at least some ceanothus to show during the Going Native Garden Tour which is this coming Sunday.

And here's a close-up. No bees because it's been quite cold and very windy the last 2 days. 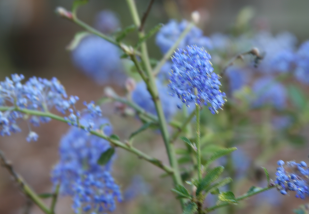 And finally, I've run out of daylight. Just lucky that this Carpenteria Californica (California bush anenome) is white, so with just a bit of reflection, I was able to get a photo. Five blossoms are open, 200 more are to come (at least). And these blossoms are 2-3 inches across, so it's really quite a show! 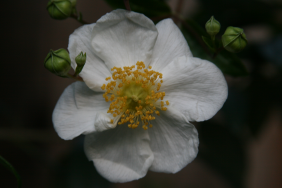 I actually took some photos of another plant, but I want to send one of these photos to the Photography Competition at Gardening Gone Wild. Have a look, you too could participate! There's even a prize. But most important, we can all have a look at each others favorite photos, and get some feedback from Saxon Holt, one of my heros.
But now, I'll wander over to Carol's and see what else is blooming...
Before I go, though, an invitation to visit Country Mouse, who takes you on a tour of her blooms in the next two posts (well, maybe, 1 1/2 posts) immediately below this one.

Monica the Garden Faerie said…
Better late than never--Timing has never been my strong suit for this kind of thing. Thanks for sharing your blooms.
April 16, 2009 at 7:52 AM

donna said…
Oh, I see so many things that are of interest to me. Your Shasta Sulfar looks to have a silvery foliage which looks pretty with the yellow. The blue of your Ceanothus is stunning. I do hope we get to see a photo of the Carpenteria Californica when it has 200 white blossoms. Good luck with your photo going to the Photography Competition.
April 17, 2009 at 5:12 PM

Kathy said…
I really enjoy seeing plants like the buckwheat and the ceonanthus that aren't hardy here.
April 18, 2009 at 6:02 PM

Linda said…
Lovely blooms, some familiar to me, many not. I've never seen a small Ceanothus before - the ones I know are big wall-smothering affairs, so it's a discovery to see such a delicate one.
April 19, 2009 at 5:26 AM